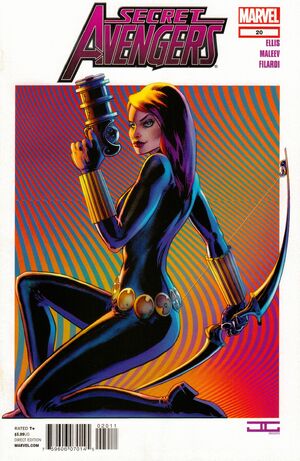 On a routine mission against the Shadow Council, the Secret Avengers find a portal leading somewhere dark. They rush to attack it... only to be brought down by a hidden barrage of rayguns, which seems to kill them. In desperation, Black Widow searches War Machine's armour for a weapon, but he gives her a gauntlet. Hoping it is a weapon, she tries to use it... and is immediately teleported to a Norwegian safehouse. This is interesting, as she knows she destroyed this safehouse and its stockpiles of gold and years ago.

The gauntlet activates, playing from a set number of responses. It explains that it is a time machine, with a limited battery life and a list of co-ordinates worked into it. She asks if it can send her back to erase the evens that brought her here, but it cannot perform action which countermands existing events as the device knows them. She also needs to eventual creation of the time machine itself. Stumped, Black Widow realises what the device is trying to tell her - if she can arrange it so she controls everything going into the fight, she can change what happened after she left.

Going to Secret Avengers HQ the day before the mission, she asks Hank McCoy for advice. She travels back over forty years and uses gold from the safehouse to recruit Count Oscar Khronus, a scientist who robbed banks to fund his time travel research. She knew he would disappear this year, and it turns out she was the cause: with her money, he moves to South America and gives up on crime for pure research.

Most of the rest of the money she takes to ten years ago and gives to a high-tech gunmaker named Harry Grindell Evans - known as "Death-Ray Evans" for his love of cutting-edge science. She recruits him to design the weaponry the Shadow Council will use, and then design in a flaw that she can use.

Thanks to a visit to Doctor Druid - less than a week before his untimely demise - she realises what she will need to shut down the portal quickly, and takes the information back to Evans.

Over a series of visits, spaced years apart, she sees Count Khronus' research progress, from time machines the size of buildings, to car-sized, to the very device she is currently using. Khronus' last act before dying was to program the gauntlet to the specifications she left them - specifications she has been using. She then uses blackmail to get the device placed on a list of DoD-approved additions to the War Machine armour in the months before the mission.

The penultimate part of the task comes when she brings Death-Ray Evans to the safehouse. He assures her that he has built the weapons she wanted, then sold them to her enemies. He hands her a counter-device. It will reduce the effectiveness of the lasers to 'stun' devices. A second function of the device will interfere with the portal, leading ultimately to an explosion. It is one-use only. He wonders why he brought him here, and she explains that in a few hours, her present-day self will decide the safehouse is compromised and detonate it by remote control. She incapacitates Evans and escapes with the device. Evans comes to in time to die in the explosion.

On the day of the mission, Black Widow arrives a little early and gets comfortable. Using the device's first function, she saves her friends, then watches herself teleport away. Then she activates the second function, and throws away both the wasted time machine and the one-use detonation trigger.

The day is saved. Black Widow seems tired. Other than that, it is a routine mission.

• The Secret Avengers are all dead save for the Black Widow.

• The world's greatest secret agent finds herself one year in the past, on the most secret mission of all: saving her team, and saving the world, without letting anyone see her... especially her team.

Retrieved from "https://heykidscomics.fandom.com/wiki/Secret_Avengers_Vol_1_20?oldid=1655341"
Community content is available under CC-BY-SA unless otherwise noted.