Part of the 'Avengers vs. X-Men (Event)' event 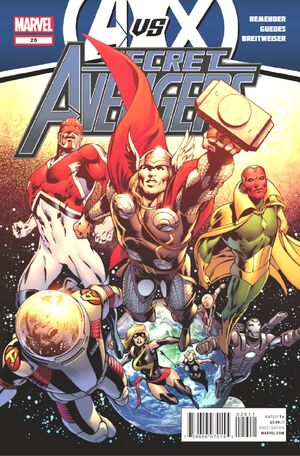 Thor and the Secret Avengers try to capture the Phoenix in space before it can reach Earth, only to be defeated. Meanwhile, a group of Kree priests attempt to resurrect Captain Marvel using a shard of the M'Kraan Crystal, an act that draws the Phoenix away. The Secret Avengers then travel to Hala (the Kree homeworld) to regroup and encounter the resurrected Captain Marvel.

• Thor leads a secret team of Avengers on a suicide mission to stop the Phoenix by any means necessary!

Retrieved from "https://heykidscomics.fandom.com/wiki/Secret_Avengers_Vol_1_26?oldid=1733209"
Community content is available under CC-BY-SA unless otherwise noted.