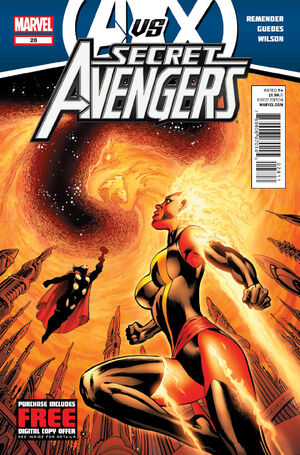 On Hala, Captain Marvel, Ms. Marvel and Protector carry the unconscious forms of Thor, Vision and Beast to the main thoroughfare, where an Accuser has Captain Britain, Valkyrie and War Machine bound and chained, awaiting execution. Vision tells them all to wake up and the three Kree heroes are freed from the illusion, along with all the other Kree citizens in the area. Inside their citidel, the Minister Marvel and his son view with growing distress the Kree and Avengers breaking free from their illusions.

The Minister then kills his son, and when the Avengers break in to capture him, he shoots himself in the head, committing suicide. The heroes go to try and stop the Phoenix from consuming Hala, and Ms. Marvel taps into her Binary powers and begins to actually hurt the Phoenix until her power rejects her. Captain Britain then takes his shot, but ultimately it is Captain Marvel that the Phoenix wants, so Mar-Vell sacrifices himself, satisfying the Phoenix temporarily and it resumes its course for Earth. Back in the Quincarrier, Carol reflects on losing her friend again, and on a deserted moon, Mar-Vell's body lies and begins sprouting fresh fauna.

• Can Ms. Marvel and The Protector break free of Minister Marvel’s influence to aid their former companions?

• When all else fails, one Avenger must rise and make the ultimate sacrifice…but will his death be enough?

Retrieved from "https://heykidscomics.fandom.com/wiki/Secret_Avengers_Vol_1_28?oldid=1655352"
Community content is available under CC-BY-SA unless otherwise noted.