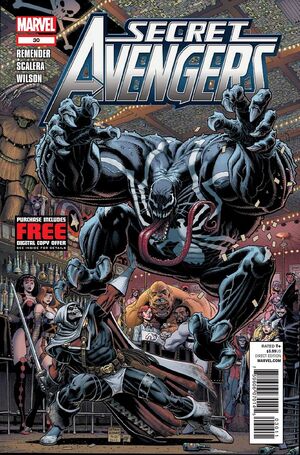 Look out! It's second-rate Thor Lady and Captain Lamepower!

Appearing in "Something Wicked This Way Comes"Edit

• High-spy-adventure! Hawkeye, Venom and Ant-Man must defeat an army of villains to grab Max Fury!

• Secrets! The truth behind the Shadow Council’s ultimate plot!

• Paranoia! Black Widow knows who the traitor is, but can she get to her teammates in time to save them from his schemes?

Retrieved from "https://heykidscomics.fandom.com/wiki/Secret_Avengers_Vol_1_30?oldid=1520114"
Community content is available under CC-BY-SA unless otherwise noted.