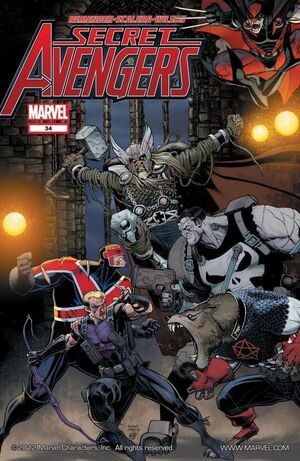 Decades ago, in a Weapon Plus lab, three researchers used a combination of cutting-edge science and Merlin's Orb of Necromancy to give life to twenty androids. One of the scientists immediately began pushing for the project to try for the next stage of human evolution - forced roboticization. The other two argued against it, but the firt, the man they called "Father", insisted that life would find a way.

Today, the Lighthouse, headquarters of the Secret Avengers, has just been attacked by a gang o android freedom fighters called the Adaptoids. Eugene Thompson, crippled, risks death in space to get the tools to save the Valkyrie, but they are both about to die - until Black Widow shows up to save them. She gets them to the Pymporter before the miniature space station burns up in Earth's atmosphere.

Meanwhile, on a parallel Earth of the undead, Hawkeye & Captain Britain are fighting that world's Avengers over the Orb of Necromancy, which can deactivate the Descendants. The Avengers of the Undead have a plan to spread undeath across the multiverse in a conquering wave of postmortal existence... but the Secret Avengers grab the Orb and run.

Captain Britain tries to get away via a portal to Otherworld, but Brother Voodoo shuts it down; in his own universe, his magic is the strongest. Immediately afterwards, Thor blasts them with his hammer, forcing a crashlanding. The timely arrival of the Beast looks as if it will save them, but the portal closes behind him and the rest of the Avengers of the Undead show up...

Using the Pymporter, Black Widow's team lands in the last adress used - The Core, the robot city at the centre of the Earth. A civil war is going on, but the heroes make a beeline for the central building. There, Father is preparing for the final stage of his decades-long plan of contagious robot evolution: preserving human minds on nanoscale robotic pellets, and scattering them across the universe. Potentially, every human becomes a god. And they will be led in this by the first android on Earth: Jim Hammond, the Human Torch.

In another part of the Core, Deathlok Wasp has Hank Pym strapped to a machine. She explains that, in her time, Hank Pym's body was too mangled for the Deathlok process, and she was amazed to discover that she missed him. To the sound of Hank screaming, she explains that she will grant him immortality, then activates the machine. Within seconds, the Avenger has joined his wife - in inhumanity!

• The Avengers are taken down leaving only the Secret Avengers to stop Father’s automaton invasion and the plague of the Descendant’s contagious robot evolution!

• Why has Captain Britain just hurled mankind’s only hope of salvation into the black heart of Earth 4680?