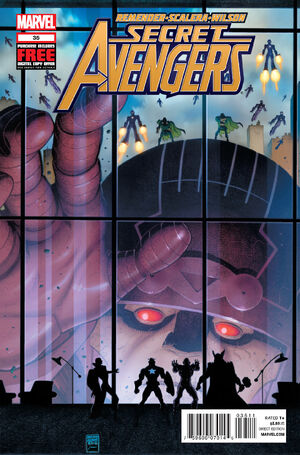 Appearing in "Tomorrow Will Rise"Edit

Synopsis for "Tomorrow Will Rise"Edit

In the years between his self-awareness and Dec 7, 1941, Jim Hammond saw a film that would greatly affect him: "Pinocchio". He saw it many times, that story of an artificial being who ultimately found acceptance by the humans by becoming one of them. Today, it has powered a political awakening, which will see Hammond lead the people of the Core as they bring about the Singularity. No-one can stop them.

On a nightmarish parallel Earth, Hawkeye, Beast and Captain Britain have gone looking for a vital artifact, but run into the local version of the Avengers. Fighting them off, our heroes escape, and Captain Britain explains: the artifact is Merlin's Orb of Necromancy, stolen from Otherworld by Cap's father or the final stages of the Descendants' creation. It is the ultimate source of the "spark" of life that powers all Descendants today. Captain Britain thinks they can use it to kill all their opponents, but Hawkeye plans to use it only as a threat. Beast is skeptical of this tactic, but Hawkeye points out that if it was one of the many sapient AIs they have met, they would say the same as him. Beast protests they cannot even get home, but Cap says he has a plan.

In the Core, Venom, Valkyrie and Black Widow are breaking into Father's base, hoping to find something they can use. However, the only member of Father's army they encounter is a hidden Black Ant, who radios the others.

In New York, Father learns the call and gets down to his real mission: explaining his plan to the collected UN. He explains that he represents the next step in intelligent life on this planet, true cybernetic post-humanism. Humans have given the Descendants and their allies grief and racism in the past, but they are a community, with families and lives. More, the human civilization is so dependant on technology that they have already won. Father explains that Descendants live everywhere in human civilization, breeding with humans. He then introduces Parvez, a naturally-occuring Descendant, born of an android mother and a human father. His birth heralds the natural rise of the robots; Father is simply accelerating the process, using his nanotechnology to give all humans bodies like his.

At this, a man in the first row accuses him of being a super-villain, but Father dismisses this as the eternal complaint of the losers in a revolution. He calls upon his children to rise and spread the Descendant gospel.

At this, a man in the second row splits open, flooding the chamber with Father's nanotechnology. Around the world, humans, from unassuming New Yorkers to the Winter Guard of Russia, reveal themselves as Descendant sleepers. Around New York, heroes hear the news - and around New York, they encounter rebel robots, fighting for their future. Surveying this, Father says that his future has arrived.

• Torch, Venom and Valkyrie infiltrate the rebel robot base In The Core, but are Lord UltraVision and Monarch Machine Man friend or foe?

• Torch must choose between mankind and the perfect future Father will create for all automatons!

Retrieved from "https://heykidscomics.fandom.com/wiki/Secret_Avengers_Vol_1_35?oldid=1731663"
Community content is available under CC-BY-SA unless otherwise noted.