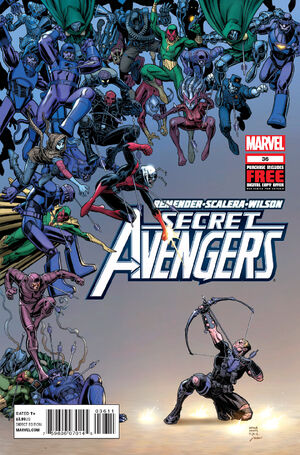 In their stronghold, the Avengers of the Undead are gathered to discuss their goal: to track down the intruders who have stolen the Orb of Necromancy and continue with their plan to stop the insidious spread of life across reality. Suddenly, their prey is ushered in by the hunchback Jarvis, and offers them a deal: the Orb of Necromancy in exchange for safe passage home. Gloating, Brother Voodoo reaches for the Orb... realizing too late that it was a setup. Captain Britain activates the Orb as they are both holding it, turning Brother Voodoo into a flesh-and-blood human. With this distraction, the Avengers are able to use their magic against his will, and depart. The Avengers of the Undead swear vengeance.

Returning to their home reality, the trio are shocked to discover the Descendants' revolution has already begun. By chance, they gain the help of Spider-Man, but the argument of how to stop the robots hits a speedbump when Beast kills one of the robots and it dies like a human. Captain Britain, however, is already away: his parents were killed by a sentient computer his father buit, and he vows to stop this event before it becomes his family's legacy - but he is shot down by the android Human Torch, who has joined the Descendants.

On the rooftop, Spider-Man, Beast and Hawkeye are discussing the effects of activating the Orb of Necromancy, but are ambushed by Deathlok Wasp and Deathlok Giant-Man. Their cyber-chauvinism is amusing to Father, who informs the duo over the radio that they only need to hold the humans off a bit longer, and they have won.

In the Core, another Secret Avengers team breaks into the nursery of Parvez, who was kidnapped from the heroes by a Descendant strikeforce. As they prepare to escape with him, the group is ambushed by the Black Ant, an LMD of Ant-Man who infiltrated the team. Black Ant explains that he remembers every part of Ant-Man's life, and that if he did not do as Father said, Father would have killed him. Black Ant's justificiations cause Venom to go berserk, and a fight begins.

Back on the roof, Beast reveals his secret to Deathlok Giant-Man: ever since he heard Giant-Man was going to be on the team, he began preparng for a robot invasion. He demonstrates this by scrambling the Deathlok circuitry wih an anti-personnel EMP syringe. Giant-Man recovers, and in the shock, Deathlok Wasp escapes with the Orb of Necromancy.

Giant-Man tells them what he knows: if they use the Orb, they can kill the Descendants. But if they strike after the virus has run its course, then they will kill everyone on Earth. Enraged by how he was used, Giant-Man grow to colossal size and punches a Sentinel.

It is a battle on many fronts. For instance, in the Core, Black Ant just shot Venom in the head...

• In New York The Master Mold rises and the only way to stop him is to kill The Torch!

• Black-Ant vs Hawkeye the final showdown!