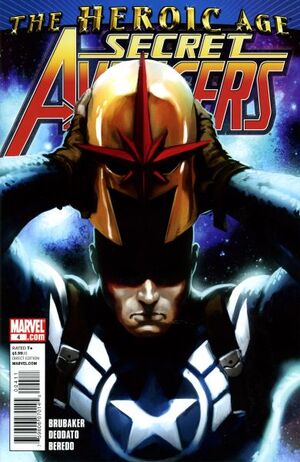 Sharon Carter has lost her quarry carrying the Serpent Crown. Then suddenly, she picks up Ant-Man's transponder signal coming from Texas. Putting up a radio channel to him, she learns that he had somehow been transported from Mars. And right now, four men with nukes strapped to their chests are ready to head through the same portal that brought him there.

Meanwhile, on Mars, the Xandarian Worldmind has come up with a daring plan to transfer the Nova Force into Steve Rogers. Despite the danger of going insane and the fate of the universe at stake, Rogers goes through with it nonetheless, with evil tentacles rising from beneath the Martian surface. The process is successful, depriving a possessed Nova of his powers. Now a Nova Centurion, Rogers goes toe-to-toe with Nova, while his teammates and Archon try their best to prevent the Dark Son from escaping his prison.

Back on Earth at the Shadow Council Citadel, Thorndrake has left to show the Council their captured Serpent Crown. Inside the citadel, Sharon is advising Ant-Man via radio to stop those kamikazes from blowing up Mars. With reluctance, he drives straight into the Vanishing Point. In transit, he uses his Wasp Sting to set off the nukes prematurely, causing the Vanishing Point at both sides to collapse, taking out each respective building, as Ant-Man returns to Mars. Nova senses the destruction of the only link to Earth, as the Secret Avengers collapse a structure onto the Dark Son, as Rogers rips the Thorned Crown off of Nova. With the universe saved for the time being, Archon announces that he will take the Crown elsewhere where no one can find or enshrine it.

The Secret Avengers then take note that without the Crown possessing a host, the oxygen levels on Mars start to drop and all of the slaves the crown was controlling dropped dead. When they note the disappearance of Ant-Man, he turns up, exclaiming his success in saving them, but no one takes him seriously. Waking up, Nova, confused about what happened, asks for his helmet back. Worldmind then transfers the Nova Force back into Nova but with he quickly leaves to assist the Guardians of the Galaxy, meaning that they will have to find another cosmic-level hero. En route back to Earth, via comm, Sharon shows Rogers satellite footage of Nick Fury in league with the mysterious shadow agents.

Retrieved from "https://heykidscomics.fandom.com/wiki/Secret_Avengers_Vol_1_4?oldid=1737987"
Community content is available under CC-BY-SA unless otherwise noted.