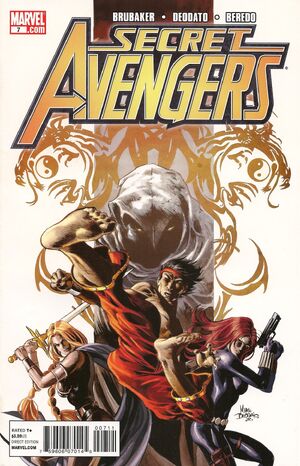 Appearing in "Eyes of the Dragon: Part 2"Edit

Synopsis for "Eyes of the Dragon: Part 2"Edit

The Secret Avengers are under attack by the Hai-Dai, who seek to capture Shang-Chi. Despite their best efforts, Shang is captured. But Steve Rogers confidently feels that his backup plan will succeed. At the moment, as the Ha-Dai spirit Shang away in their plane, Ant-Man, who was hanging from one of Shang's hairs, takes the Hai-Dai by surprise. He goes from small to big size, only to unintentionally crash the plane, though he flew Shang out. A Quinjet then sets down to extract them, as Ant-Man is given assurances that he did a good job and no casualties.

Meanwhile, the Prince of Orphans and Valkyrie scout out the final resting place of Shang's father, Fu Manchu. They find a few Shadow Council agents on guard, having expected that someone might come looking. They dispatch the guards, before taking on prisoner. The agent is then taken to a unknown location to be interrogated. The agent boldly believes that the Captain America won't torture him. However, Rogers reminds the agent that he's not Captain America anymore and promises that either he, Black Widow or Sharon Carter will get what they need out of him. The agent only promises that the people he work for will make him regret everything.

Elsewhere, Max Fury informs Aloysius Thorndrake about their two unfortunate mishaps. Manchu himself is not pleased, for their is only two days left to complete the ritual needed to restore himself to life. Thorndrake promises that his agents, Max and John Steele, will handle this.