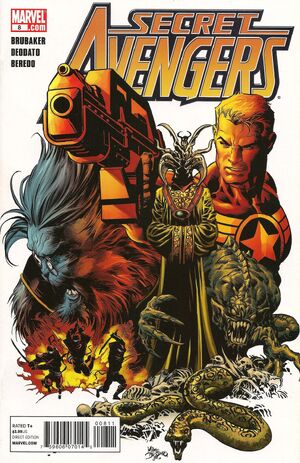 Appearing in "Eyes of the Dragon: Part 3"Edit

Synopsis for "Eyes of the Dragon: Part 3"Edit

John Steele and Max Fury try plotting a strategy to attack the Secret Avengers. Meanwhile aboard the SA's Quincarrier, Beast is debriefing the team on Fu Manchu an his connection to the Eyes of the Dragon. Apparently, Fu Manchu is theorized to be one of the creators of the eyes. And according to the legends, the eyes can be used on another family member, like Shang-Chi, to steal his lifeforce to render Fu Manchu immortal. As Steve Rogers tries to speculate what the Shadow Council has to do with this, Sharon Carter informs him that Fu Manchu and his Hai-Dai are assaulting Hong Kong in broad daylight. The Secret Avengers get down to the surface to face their foe, but Shang notices something off; this is not like his father.

Suspicions are proven correct, as Steel and Max infiltrate the Quincarrier and disable both Sharon and Beast. The SA are too late to help out, as they are delayed by the destruction of the Quinjet. By the time they get back, they see Steel on screen with Sharon as his hostage. He proposes a trade: Sharon for Shang, otherwise the former will be dead by tomorrow.

Retrieved from "https://heykidscomics.fandom.com/wiki/Secret_Avengers_Vol_1_8?oldid=1737999"
Community content is available under CC-BY-SA unless otherwise noted.