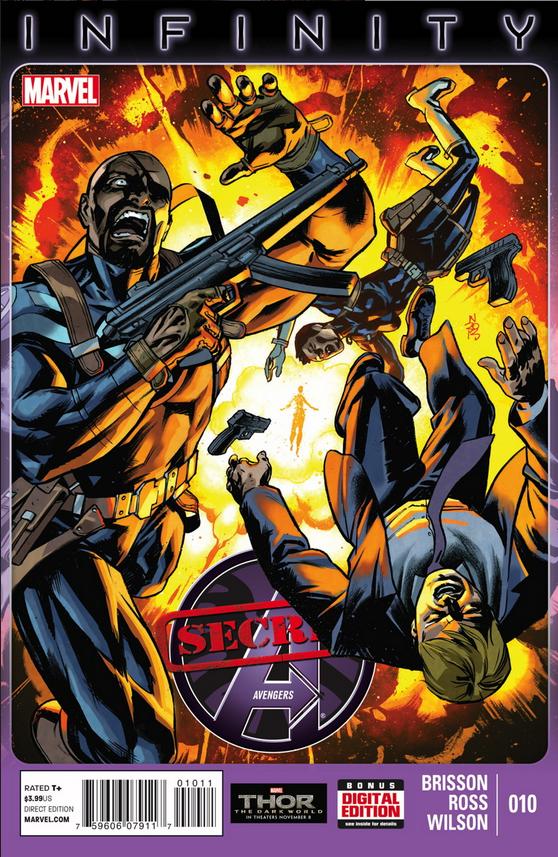 This is all your fault. You! You did this to our neighborhood. Our homes. And for this you shall pay!

-- The Junkman of Brooklyn

S.H.I.E.L.D. Computer Specialist Sarah Garza was one of the newly surfaced Inhumans after Black Bolt unleashed the Terrigen Mists upon the entire face of the Earth. Shortly after emerging from a coccoon, her unstable powers created an explosion which decimated her entire apartment complex. She was retained by S.H.I.E.L.D. and Maria Hill after finding out she was one of theirs and realized Garza could be a potential asset against Thanos' forces. Although she lacked experience, Maria Hill partnered her with Iron Patriot and gave her her own Iron Man armor to control her powers. She and Iron Patriot arrived to Brooklyn as reinforcements to help Nick Fury, Jr. and Phil Coulson fight the invading forces. Sarah created a powerful blast which along with the support of the Iron Patriot Drones, annihilated the aliens. During the sweep, the heroes were attacked by an unknown enemy with apparent telekinetic powers that blamed Sarah Garza for what happened to the apartment complex.

• With the Avengers off-world, what will S.H.I.E.L.D. do when Thanos strikes?

• It’s up to Maria Hill, Nick Fury and Agent Coulson to repel the invasion!

• …and what’s the deal with the newest member of the Secret Avengers?

Retrieved from "https://heykidscomics.fandom.com/wiki/Secret_Avengers_Vol_2_10?oldid=1452152"
Community content is available under CC-BY-SA unless otherwise noted.