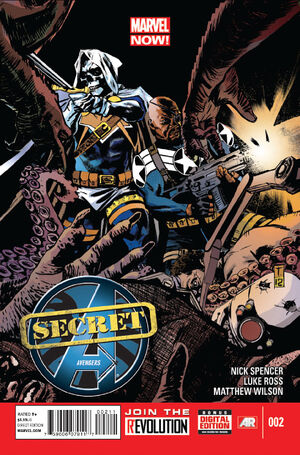 In their second mission as a team, the Secret Avengers raid Bagalia and fight through the Masters of Evil, in order to free Taskmaster, who is going to be auctioned off to the highest bidder. Mockingbird joins up with them, using S.H.I.E.L.D. Camo-Tech to masquerade as Aloysius Thorndrake of the Shadow Council. Nick Fury Jr. pays Crossfire to let Taskmaster out of his cell. After Taskmaster agrees to join the Secret Avengers, he goes on a mission to infiltrate A.I.M.'s new High Council (consisting of Andrew Forson, Graviton, Jude the Entropic Man, Mentallo, Superia, and Yelena Belova).

• Nick Fury knows who he wants for the new Secret Avengers--the deadly mercenary known as Taskmaster!

• Trouble is, how to extract S.H.I.E.L.D.’s newest prospective agent from the only prison cell in Bagalia – the nation-state built by and for super villains!

Retrieved from "https://heykidscomics.fandom.com/wiki/Secret_Avengers_Vol_2_2?oldid=1727417"
Community content is available under CC-BY-SA unless otherwise noted.