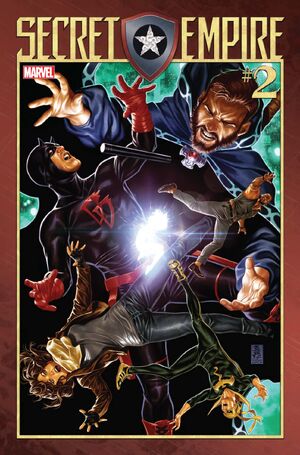 Enshrouded in darkness, plagued by the minions of Baron Mordo and cut off from all assistance, The Defenders and Doctor Strange struggle to save the lives of the innocent people consigned to this hell on Earth. Will Dagger prove to be the key to stopping this nightmare? Meanwhile, will the appearance of a new hero provide Iron Man with the key to Captain America’s startling change? THE SECRET EMPIRE WILL DEFEND YOU!

Retrieved from "https://heykidscomics.fandom.com/wiki/Secret_Empire_Vol_1_2?oldid=1652067"
Community content is available under CC-BY-SA unless otherwise noted.