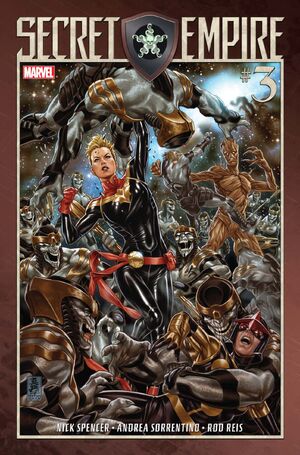 Under constant attack from wave after wave of invading Chitauri aliens, Captain Marvel and the deep space task force under her command is waging a war of attrition — one they may not be able to survive! And back on Earth, things aren't looking too rosy for Hawkeye and his band of renegade heroes, either! But don't worry — The Secret Empire will avenge you!

Retrieved from "https://heykidscomics.fandom.com/wiki/Secret_Empire_Vol_1_3?oldid=1652069"
Community content is available under CC-BY-SA unless otherwise noted.