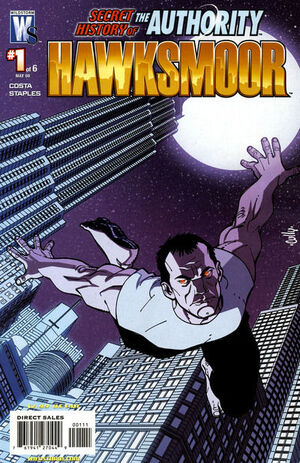 In the city Kiev in the Ukraine a Slavic god is attacking the capital city. Jack Hawksmoor noticed it before even The Carrier picked it up and now the whole of The Authority has come to deal with it. The team approaches it and can hear it talking but The Engineer can’t translate what it’s saying. The Doctor then says that no one can because it comes from a time when language and culture were inextricably linked. Swift flies by and makes that comment that she can read the date on the quarter from two miles away but looking at the giant god is giving her a headache. Apollo and Midnighter gripes that there will be nothing to hit. Just then the enormous deity raises his hand and something happens that sends half the city back into the eighth century. Jenny Quantum is standing on a nearby building but is unable to help the team because the god seems to be affecting her physically just by being there. The Engineer sees what the god did to the city and sends Jack to check for causalities.

Down below Jack sprints through the city and notes only a few injuries. He finds a man half buried beneath fallen cinder blocks and asks the blocks to dissolve off the man. Nothing changes and Jack asks Kiev if it can hear him. When he gets no response he tells Jenny that the city isn’t responding to him and after he manually removes the cinder blocks he goes to see what happened to the part of the city that got taken away. As he runs he feels as if something is blocking the city from hearing him. He keeps going and when he steps onto the grass of the part of the city that’s in the past his brain is affected and he drops to the ground.

Up in the sky Apollo drops Midnighter so he can circle the god and superheat the moisture in the air which will hopefully break up the storm the thing seems to be connected to and hurt it somehow. He doesn’t get very far though because the god sees him and strikes him down with a lightning bolt. Back on the ground Jack is awake but crippled from the waist down. He tries to tell a building in the city to catch Apollo but it doesn’t respond and when the solar powered superhero crashes debris flies everywhere. Jack tries to protect some civilians and as everything fades to black he remembers the last time a city didn’t listen to him.

It’s 1994 in San Francisco, California and Jack Hawksmoor is leaping over to a giant robot that is about to attack the Golden Gate Bridge. In midair Jack smells what the thing is made of, normal metals and something more exotic. He bounds from the bridge and increases his density hoping to hit the robot with enough force to damage it or knock it over but instead he just ricochets off towards the bridge again and crashes onto the hood of a woman’s car. Jack gets up and has a brief word with the woman. The sight of her seems to stumble him and her perfume makes his head go light. Once he gathers his wits he jumps on a cable on the bridge and reassess the situation. He calls to the ruins of the quake of 1906 that are at the bottom of the bay and has them form a fist. Before he can use it to smash the robot though, the thing spins around and blasts away the fist. Then it turns its guns on Jack and fires. Jack jumps out of the way and onto the robot's gun arm but the cables he was holding onto are shot in half. When Jack lands on the robot he changes tactics and has the ruins in the bay spin to cause a giant wave. Before the wave hits he tells everyone on the bridge to get into their cars and moments later the wave knocks the robot into the bridge and fills it with seawater. Jack jumps back onto the robot and starts punching his way into it to find its pilot.

Inside the robot is what appears to be a blue man in an old English outfit. The pilot doesn’t surrender so Jack rips off one of its enormous shoulder guns and threatens him some more. At that moment the strain of having caught the robot and taking the huge wave causes the base of the bridge to crack. Jack orders it to increase its density, fix itself and not break again. Jack sees more damage though and realizes that he needs to end things quickly so he can give the bridge more attention. He calls the ruins once again and has them hold the robot’s legs and then tells one of the bridge’s cables to snap. When the cable breaks it whips out and cuts off the robot’s head. The rest of the machine sags but doesn’t fall and Jack starts ripping into it. From another point on the robot that Jack can’t see, the pilot escapes onto the bridge and makes a run for it. However, the girl whose car Jack landed on appears and decks the pilot. Jack drops down onto the bridge and asks her where she learned to throw a punch like that. She says she does Tae Bo but Jack is looking her over again and feels like there’s something off about her. He asks her if she’s completely human and she says no. Jack turns to the bridge for some quick repairs and she tells him that she tried out for Stormwatch Jack hears the police coming and prepares to leave. As he jumps away she tells him her name is Juliet and he apologizes about her car. Jack thinks to himself that Juliet will be trouble so he decides to forget all about her.

Later that night Jack is jumping through the city and thinking to himself. He never sleeps but there’s a part of his brain that’s never really awake, it just resonates in a frequency above consciousness. It’s the closest he comes to dreaming and that’s where the city speaks to him. He keeps moving through the city and thinks more about his abilities. Right then he feels a pull and goes to check it out. Two older teens have cornered a young girl and when one pulls a knife Jack drops the ladder of an apartment’s emergency stairs on his head. He grabs the other one by the collar and drags him up on the roof. He’s about to tie him to something when he gets another alert. Instead he threatens the thug and throws him off the building, purposely breaking his leg.

Jack skips over to Pacific Heights and goes to house where he knows something bad just happened even though the city won’t tell him what. Jack smells something burnt but knows it wasn’t a gun. He finds he body of a man in the kitchen and can tell he died around an hour ago and finds the source of the burn smell to be the hole in the man’s chest. Jack can’t feel anything else though. The rest of the place gives him static and the TV and windows won't show him what happened. He can tell things about the house, but doesn't know anything else about the murder. He finds a door that he doesn't already know what lies behind it and goes inside. In the room he finds lots of blueprints for San Francisco going back to at least 1897. He says that looking at city blue prints always makes him feel like looking at a sister naked. It freaks him out. Suddenly he hears a key in the lock of the front door. The fact that he didn't feel the person coming tells Jack that whoever it is, is being sheltered by the same informational black hole as the mans killer and so Jack thinks the person is probably connected to the murder. Jack hides behind the door and after the person calls inside for “Ben”, in walks Juliet.

Retrieved from "https://heykidscomics.fandom.com/wiki/Secret_History_of_the_Authority:_Hawksmoor_Vol_1_1?oldid=1463467"
Community content is available under CC-BY-SA unless otherwise noted.