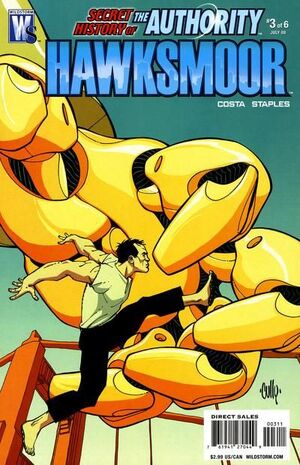 Jack Hawksmoor awakes suddenly from a nightmare of strange computer signals, police reports, images of a woman at the Golden Gate bridge and horrific machines doing things to him while he’s trapped in a tank. When he jumps up from bed a nearby lamp explodes and a window breaks. Across from him he can see Juliet sitting on a chair drinking coffee and she’s already complaining, talking about how he’s destroyed her car and now her apartment. He repairs her window with a thought and apologizes. He goes on to explain about his sleep cycle, how he only needs rest once every few months and when he does sleep, it’s not good. He figures that getting blown up was enough for him to need an early recharge though.

He looks under the sheets and asks if they did anything and she tosses him some clothes and tells him they didn’t. He passed out a couple of minutes after he arrived the night before. He gets on his clothes and prepares to leave when she throws her mug at the back of his head for not saying “thank you”. She’s mad because he spent two days asleep in her bed while she took the couch and she doesn’t even know who he is. After that he decides to fill her in on who he is so he tells her his name and his abilities to talk to cities. Juliet then asks how he came to be like that, if he’s Gen-Active and he tells her that no, he used to be a normal person until some people, bad people, kidnapped him as a child and re-built him.

Juliet asks if they were the same kind of bad people that killed Ben and Jack says that it wasn’t, and that the people that done to him were gone a long time ago. Jack gets ready to leave so he can figure out what’s going on and she tries to go with. He turns her down saying he works alone, always. She asks why he came to her then and when he says it was a mistake she tells him she thinks it was a mad tired of being alone. She gets closer to him but Jack pushes her away telling her that she doesn’t know what they did to him. She takes out a cigarette and tells him that everyone has scars but love saves everyone. She turns her back on him and goes to the bed, dropping her clothes along the way. Jack follows.

Afterward, Juliet is asleep and Jack is smoking and thinking. Talking to cities is as natural to him seeing and he realizes that explaining it was hard. However, discussing it had made him think and he discovered that there was something he had overlooked. There was also something she had said about the bad people that he couldn’t stop thinking about. While Juliet is asleep, or so he thinks, Jack sneaks out of the apartment.

Back at Ben’s house Hawksmoor is trying to locate something He goes into the house and his thoughts are jumbled into meaninglessness but he keeps walking, he knows what he’s looking for. In the room with the blueprints he feels something in the ceiling and breaks it loose. A golden hexagon falls loose and he crushes it. He thinks afterward that it would have been best to be able examine it in a single piece but it was already causing enough informational interference that he could barely form thoughts. With it broken now he can see things clearly. The object had been lodged in the roof for a long time, whatever is going on isn’t new. Jack looks at the blueprints and figures out where the building was going to be built and heads out to look at the future site which just happens to be where the train exploded.

When he gets over to the area he can see the hole in the ground and feels it aching like a scar. Before he can do anything though, one of the men from the other night reveals his presence and is armed with a shotgun. Jack turns to him and gets shot in the chest at point blank. The man says he knows it hurts but he also knows it won't kill him. Jack gets up and after the man shoots him again he says he knows because he’s one of the people that built Jack. Hawksmoor flashes back to when he was being experimented on and changed and his rage brings him to his feet. He grabs the barrel of the gun and twists it but the man shoots anyway and is knocked back. Jack walks over to him and stomps on his chest before starting to question the man, asking him why he’s there, why he's come back. Jack promises to kill all the people that come back for him, but is then hit behind by a wrecking ball and flings him through the air. When he lands he realizes that the man had one of the hexagons on a necklace and that’s why he had been totally blinded to the wrecking ball. The man runs and Jack goes after him, who runs up an electrical pole and surfs a power line to escape. Jack knows that without his powers he can’t follow or stop him. He sees that the chase has taken them to a bridge so he looks down and thinks about jumping.

He lands on a truck and jumps onto another one but trips and falls onto a car. He tells the driver to drive, threatening to kill him if he doesn’t, and tells him where to go. Jack can’t talk to the city but he still has the map in his head and he can figure out where the man is going. It isn’t until he gets there though, that he realizes why. When the car nears the Golden Gate Bridge Jack sees the man getting into the robot that Hawksmoor had fought there days before. Jack’s driver brakes and tosses Jack before getting away and the man Jack was chasing greets him from inside the robot. The man taunts him saying, “City can’t help you now, pal.”

Retrieved from "https://heykidscomics.fandom.com/wiki/Secret_History_of_the_Authority:_Hawksmoor_Vol_1_3?oldid=1463471"
Community content is available under CC-BY-SA unless otherwise noted.