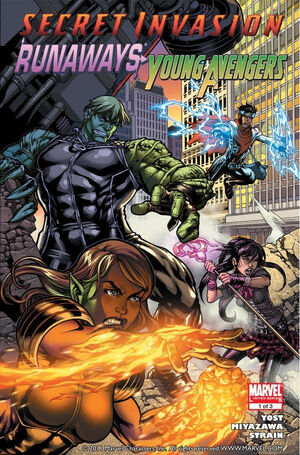 Are you listening to me?! We're all going to die here!

The Skrull armada has invaded New York, and only the Young Avengers were available to fight them. The team quickly lost Wiccan and Hulkling before the Initiative arrives. Meanwhile, the Runaways return from their trip to 1907 to find the Skrull invasion. In order to protect them, Xavin knocks them all out. Nico wakes up and asks what's going on. Xavin says that the Skrulls are trying to take over and that they may have already won. He then tells her that she needs to get the Runaways away from New York. Xavin then flies away. Pretending to be with the Skrull army, Xavin learns that the Skrull Queen is after Hulkling because of his Skrull royalty and wants him eliminated. The Skrulls end their battle with the Young Avengers and Initiative cadets in victory, and prepare to eliminate Hulkling. Just then, Xavin flies in and saves Hulkling.

Retrieved from "https://heykidscomics.fandom.com/wiki/Secret_Invasion_Runaways_Young_Avengers_Vol_1_1?oldid=1518053"
Community content is available under CC-BY-SA unless otherwise noted.