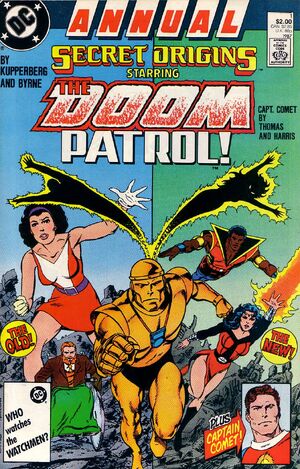 Appearing in "The Secret Origin of the Doom Patrol!"Edit

Synopsis for "The Secret Origin of the Doom Patrol!"Edit

For the first time in over two years, Cliff Steele – the Robotman, returns to the old Midway City headquarters of the Doom Patrol. As he enters the two-story brownstone, the mansions' security systems interrogate him at length in order to determine his identity. Cliff answers a series of questions and relates the origin of the original Doom Patrol members.

The founder of the Doom Patrol was Dr. Niles Caulder. Caulder was a brilliant scientist who had been hired to develop a serum to increase a person's life span indefinitely. While working on the project, Caulder discovered that his mysterious benefactor was actually a villain named General Immortus. Caulder betrayed Immortus and as a result, the aging criminal attacked Caulder crippling him. Fearing that Immortus would never stop until he was dead, he decided to form a team of heroic misfits to fight Immortus. This team became the first incarnation of the Doom Patrol.

Rita Farr was a glamorous Hollywood actress. She was also an accomplished stuntwoman and Olympic level swimmer. During filming of one of her movies, Rita exposed herself to volcanic island gases that changed her body chemistry granting her the ability to alter her size at will. Rita joined the Doom Patrol as Elasti-Girl

Larry Trainor was a civilian test pilot who had been hired to fly an experimental orbital fighter jet into the upper atmosphere. While piloting the jet, Larry was exposed to intense solar flare radiation. The radiation bonded Larry's body to a disembodied energy form known as the Negative Man. Caulder discovered Trainor and invited him to become a founding member of the Doom Patrol.

The Doom Patrol routinely fought a strange amalgamation of villains including the Brotherhood of Evil, the alien Garguax, the bizarre Animal-Vegetable-Mineral Man, and Caulder's nemesis – General Immortus. The Doom Patrol met their end at the hands of another foe named Captain Zahl. Zahl trapped the heroes on a small island where he blackmailed them into sacrificing their own lives to save the lives of fourteen people in a small New England fishing village.

Months after the destruction of the original Doom Patrol, Dr. Will Magnus – creator of the Metal Men, discovered Cliff Steele’s robotic remains. He designed a new body for him, and set him off to investigate rumors of a new Doom Patrol team.

Arani Caulder claimed that she was the wife of the late Niles Caulder. Years before the formation of the Doom Patrol, Niles traveled to Calcutta, India where he met the sickly Arani. He saved her life by giving her a sample of the Immortality Elixir he had developed for General Immortus. The elixir saved Caulder’s life and stimulated her latent metahuman super powers. Arani learned that the Chief had died and sought to put together a new Doom Patrol in order to investigate the nature of his death.

Joshua Clay was a troublesome young man from Midway City. When he was eighteen-years-old, he enlisted in the Army medical corps and served during the Vietnam War. The horrors of war helped to prompt the release of his own metahuman powers and Josh soon joined the new Doom Patrol as Tempest.

Valentina Vostok was a Russian pilot, who had defected from the USSR aboard an experimental fighter jet. Her plane crashed down into the ocean near the same region where the first Doom Patrol had died. The energy being that once bonded to Larry Trainor freed itself and bonded with Valentina turning her into a Negative Woman.

Robotman continues to provide a detailed dossier on the Doom Patrol's history. Suddenly, government agents burst into the house and try to arrest him. Robotman easily tosses them aside and vacates the house. He learns that his old teammate, Valentina, is now working with the Federal government and has been monitoring his actions since first setting foot inside the old DP headquarters.

Appearing in "The Secret Origin of Captain Comet"Edit

Synopsis for "The Secret Origin of Captain Comet"Edit

In 1931, John and Martha Blake give birth to a son named Adam. Moments later, a comet streaks across the Midwestern sky. John jokingly comments that the comet represents a sign of good fortune. Little does he know how true his statement will become. The comet emits low-level waves of radiation, which triggers a mutagenic alteration in Adam Blake's body. As such, Adam began to develop incredible mental physical attributes as he grows.

His mental skills continue to sharpen well into his teenage years, and he develops expert talents in nearly everything he tries. By the time he reaches college, he has evolved into a physical powerhouse with telepathic and telekinetic capabilities.

At college, Adam meets a science professor named Emery Zackro. Zackro is a scientific genius who has secretly developed the world's first one-man space rocket. He tests Adam's talents at length and deduces that Adam is a mutant, born with physical and mental capabilities 100,000 years ahead of his time. He offers Adam a position as an assistant working in the science hall.

One evening, enemy agents, who had learned of Zackro's work, break into the science hall in an effort to steal the solar reducer technology. Adam fights with the men and uses his telekinetic abilities to deflect the bullets fired from their guns. Zackro eventually returns to the lab, and realizes that he must forever safeguard Adam’s talents from the world, lest unscrupulous enterprising men should attempt to exploit him for their own ends.

In 1951, a global catastrophe takes place, forcing Adam to reveal himself to the public. A space-faring alien race known as the, Astur, had traveled to Earth in the hopes of terra-forming the planet, making it inhabitable for their kind. To this end, they send several large spinning tops to the planet's surface. The Astur cannot survive in an oxygen-rich environment, and the tops labor to siphon away the planet's oxygen.

Calling himself Captain Comet for the very first time, Adam dons a space suit and oxygen tank and intercepts one of the tops. He rips into the side of it and discovers that the machines are operated via remote control. He borrows Professor Zackro's spaceship, the Cometeer, and travels to the far side of Earth’s moon where he discovers the Astur mother ship. On board the ship, Adam encounters a solitary alien pilot, named Harun. Like Adam, Harun possesses an advanced intellect and the two decide to settle their differences through a contest of strategy. Adam ultimately won their mental duel, and Harun takes his own life. Captain Comet finds the computer station operating the lethal tops and reverses the controls, returning all of the stolen oxygen to the planet.

Captain Comet returns to Earth and reports that the planet is now safe from the alien threat. Reports of his deeds reach every major newspaper and radio program across the globe and Captain Comet becomes an international hero.

Retrieved from "https://heykidscomics.fandom.com/wiki/Secret_Origins_Annual_Vol_2_1?oldid=1696155"
Community content is available under CC-BY-SA unless otherwise noted.