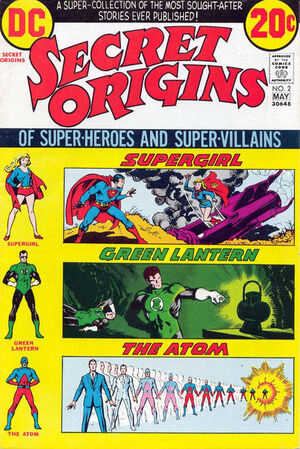 Great Guns! I seem to see a youngster flying, dressed in a super-costume! It... uh... must be an illusion!

Appearing in "The Supergirl from Krypton"Edit

Synopsis for "The Supergirl from Krypton"Edit

This story was originally printed in Action Comcis #252.

Clark Kent is working alone in his office one afternoon when he catches something out of the corner of his eye. Using his x-ray vision, he witnesses a purple colored rocket ship crash landing several miles away. Switching into his Superman costume, he flies off to investigate. When he arrives, he is shocked to discover that the rocket’s sole occupant is another Kryptonian – a young blonde-haired girl named Kara.

Kara tells Superman that her home town, Argo City was blasted free of Krypton's destruction in a bubble of compressed air. The island soared through space as free-floating planetoid. Her father was a scientist named Zor-El who created a force field bubble around the city to contain the atmosphere and also coated the ground with sheets of lead to prevent traces of Kryptonite in the ground from poisoning the populace. Years later, when Kara was a teenager, a meteor shower in space penetrated the air bubble and tore through the lead shielding. In order to save his daughter from Kryptonite poisoning, Zor-El designed a space ship to rocket her away from the city. His wife learned of the existence of Earth, and its Kryptonian hero, Superman. They chose to send Kara to Earth so that she can be with one of her own.

Superman realizes that Kara's father, Zor-El, was the brother of his own father, making the two of them cousins. He is elated to find another Kryptonian but remorseful for the fact that like he, Kara is now an orphan.

Superman cannot take charge of Kara because he needs to protect his own secret identity. However, he flies her to the nearby town of Midvale and registers her at the Midvale Orphanage. He provides her with a brown pig-tailed wig, and Kara chooses the name Linda Lee as her new Earth name. Superman promises to train Kara in her new super-powers, stating that this Supergirl will become his new secret weapon against fighting crime.

After Superman leaves, Kara settles in at the orphanage. She begins testing her new powers by cleaning her room with super-breath and fixing a bent iron bed leg with super-strength. She cannot wait for her first official adventure as Supergirl.

This story was originally printed in Showcase (Volume 1) #22.

An alien peace officer named Abin Sur of the Green Lantern Corps crash lands in the middle of the California desert. As he lay dying, he commands his power ring to seek out a worthy successor - one who proves to be fearless and strong-willed. Miles away, test pilot Hal Jordan is examining a flight simulator when a corona of green light envelops him, pulling him along with the simulator to the spot of Abin Sur's crashed vessel. Abin Sur tells Hal that the power of the ring selected him to take on the role of the Green Lantern. He gives him the ring, his costume and a power battery. He instructs him that the ring will obey his every command, but is powerless against anything colored yellow. He further tells him that the ring's energy must be charged from the power battery once every twenty-four hours. Hal agrees to accept the responsibility of wielding the ring in the cause of justice, and with that, Abin Sur passes away. Hal Jordan is now Green Lantern.

Appearing in "Birth of the Atom"Edit

Synopsis for "Birth of the Atom"Edit

This story was originally printed in Showcase (Volume 1) #34.

Retrieved from "https://heykidscomics.fandom.com/wiki/Secret_Origins_Vol_1_2?oldid=1517429"
Community content is available under CC-BY-SA unless otherwise noted.