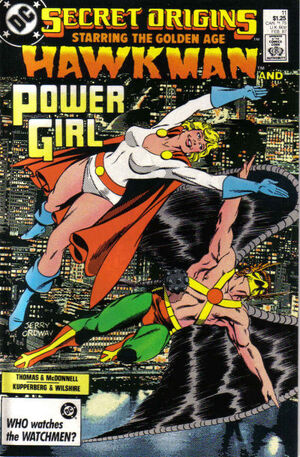 Synopsis for "The Secret Origin of the Golden Age Hawkman"Edit

Archaeologist Carter Hall was testing out his "ninth metal" anti-gravity belt while doing some research when a package came in the mail: an ancient Egyptian dagger that somehow seemed very familiar to him. Suddenly Carter fell asleep and had a dream -- he dreamed that he was the Egyptian prince Khufu, who was being tortured by the evil magician Hath-Set while protecting the princess Shiera from him. Eventually the both of them were captured and put to death by Hath-Set with the same knife that came in the mail for Carter. As Khufu's life was fading, he swore to Hath-Set that he will come to life again and this time be the victor -- the words that Carter Hall found himself saying when he awakened from the dream. As he took a walk outside his house, he found people rushing from the subway, terrified -- including a woman that remarkably resembled the princess Shiera from his dreams. They both went back into the subway station, for Carter to find bodies of passengers that have been mysteriously electrocuted to death. Carter takes the woman home to his house, where she reveals that her name is Shiera Sanders and that she has been having the same dreams as Carter.

Allowing Shiera to rest on his couch at his home, Carter begins to suspect that those dreams were actually revelations of past lives that he and Shiera Sanders have lived, and that Hath-Set must also be alive in a new form. Carter decides to investigate by trying out his artificial wings made of the same "ninth metal" as his anti-gravity belt, wearing a hawk-faced mask to disguise himself. Though he almost falls to his death, Carter concentrates and soon finds himself flying high in the sky with ease. He tracks the source of the energy surge that killed the passengers in the subway station to the laboratory of a Professor Anton Hastor, who through his private mutterings that Carter Hall overheard reveals himself to be the reincarnation of Khufu's nemesis Hath-Set. Carter as the masked man called Hawkman destroys the equipment in Hastor's laboratory, but Hastor decides to strike back at Khufu's latest incarnation through that of Shiera, luring Shiera Sanders to his laboratory using a scent only her nose can pick up.

After Carter returns to his home to find both Shiera and the Egyptian knife gone, and suspecting that Hastor lured her to his laboratory in order to kill her, he returns to the laboratory with a crossbow and a cloth made of "ninth metal" to protect her. Sure enough, while Hastor fails to kill Shiera with the knife, he attempts to electrocute her to death with his equipment, which Carter foils by covering her with the "ninth metal" cloth.

Retrieved from "https://heykidscomics.fandom.com/wiki/Secret_Origins_Vol_2_11?oldid=1663587"
Community content is available under CC-BY-SA unless otherwise noted.