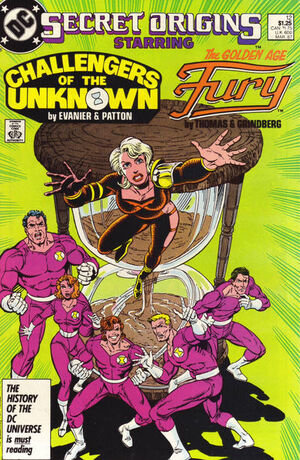 Appearing in "The Secret Origin of the Golden Age Fury"Edit

Synopsis for "The Secret Origin of the Golden Age Fury"Edit

Fury of Infinity Inc. was at the Aeropagus, searching for a stone from the Altar of Erebus, when she encounters three horrid-looking winged female beings who reveal to her the origin of her mother -- a woman named Helena Kosmatos, who possessed the same kind of powers that Fury does. This woman was a young teenage Greek nationalist who suspected that her brother Michael was secretly working for the Nazis, betraying his own countrymen in order to support his own family. When Helena showed this evidence right before their own mother, she suffered a fatal heart attack, and Helena blamed her death on Michael, swearing she will have vengeance.

After Michael left, Helena went right after him, but she was pursued herself by Nazi soldiers, who chased her to the Aeropagus. Cursing the soldiers with a curse, Helena fell into the same Altar of Erebus chamber and met the same female winged beings, who called themselves the Furies, goddesses of vengeance. One of them, Tisiphone, offered Helena power to avenge her mother's death, and when Helena accepted it on the grounds that she would do anything for that purpose, Tisiphone touched Helena's shoulder with the blade of her scythe. Instantly she reappeared at the top of the Aeropagus, this time clad in golden armor and called "Fury, daughter of Tisiphone".

With her new powers, she took down the group of Nazi soldiers that chased her. Then, transforming into Tisiphone, Helena tracked down the boat her brother Michael was using to smuggle Nazi soldiers into the country, then killed him and everyone that was on the boat with him. She fell into the water and, as normal Helena Kosmatos, was picked up by a boat carrying Allied forces and Johnny Chambers, and then taken to America. At the end of the tale, the modern-day Fury departs with the stone and continues the search for her origins.

Appearing in "Challengers of the Unknown"Edit

Synopsis for "Challengers of the Unknown"Edit

Retrieved from "https://heykidscomics.fandom.com/wiki/Secret_Origins_Vol_2_12?oldid=1456963"
Community content is available under CC-BY-SA unless otherwise noted.