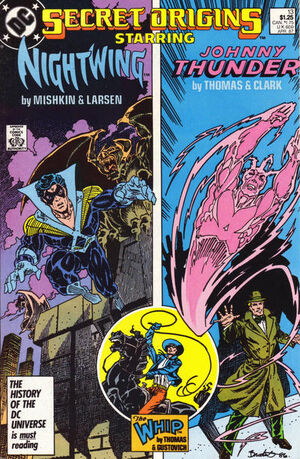 "You'll never know if you can fly unless you take the risk of falling."

Appearing in "The Secret Origin of Nightwing"Edit

Synopsis for "The Secret Origin of Nightwing"Edit

Today is Richard Grayson's 20th birthday. He (as Nightwing) and the other Teen Titans are on the planet Okaara for Starfire's arranged marriage. Nightwing and Jericho are away from the others, with Nightwing training by trying to catch an Okaaran "monkey-bird," when Nightwing reflects on his life so far.

On his fifth birthday, Dick performed on the trapeze without a net for the first time. After a successful attempt, Dick tries his parents' signature triple flip move but misses his mother's hands. He is rescued by his father. From then on, Dick performs with his family for the next five years. "Just after" his tenth birthday, his parents are killed in front of him due to the machinations of "Boss" Tony Zucco and Dick meets Batman. Dick becomes so enamored by Batman he does everything he can to be who he thought Bruce wanted him to be. He becomes Bruce's ward and trains for nearly a year, finally becoming Robin "just before" he turns eleven. Twenty-four hours after that, they're on the Zucco case where Robin takes an incriminating photo of Zucco killing a henchman which is responsible for Zucco going to prison.

Over the years, though, Dick realized he was different from Bruce in many ways and began to rebel against Bruce's unspoken plans for him. That was when he helped form the first Teen Titans and began to expand outside of his partnership with Batman. The Titans disbanded when the heroes began college. When Dick went to college, his Robin career continued well but schooling was not as successful (which further split he and Bruce). He realized he didn't need or want a degree and he didn't want to continue being "Bruce Wayne, Jr." but was unsure what to do. That's when the "New" Teen Titans were formed and Robin realized that leading the team was what he truly wanted.

About that time Batman brought Jason Todd in for training and Dick relinquished the Robin identity and started a new one - Nightwing. He also fell in love with Starfire who showed him how to live with (and even revel in) his emotions (something Batman did not encourage). But Starfire's political marriage has caused Nightwing to question his life and his role as leader of the Titans. Jericho reminds him of something he said earlier, "You'll never know if you can fly unless you take the risk of falling." With that, Nightwing commits himself fully to the Titans and the future. Jericho reveals that Starfire and Karras are throwing Nightwing a surprise birthday party and Jericho gives him his present - a holographic image of the Okaaran "monkey-bird" to remind him to "fly."

Appearing in "The Secret Origin of The Whip"Edit

Synopsis for "The Secret Origin of The Whip"Edit

In 1939 Polo player Rodrigo "Rodney" Gaynor happens to enter the town of Seguro, New Mexico where he learns of an expected lynching of a local man and the planned inaction of the Sheriff. Escorting a Miss Dillon, who is passionate about saving the man, to the church, Rodney discovers the priest has the costume and whip of the legendary hero El Castigo. Rodney takes up the identity of "The Whip" and helps rescue the boy.

Appearing in "The Secret Origin of Johnny Thunder"Edit

Synopsis for "The Secret Origin of Johnny Thunder"Edit

Jonathan L. Thunder was born "in the seventh circle of the moon Lahseen" which was at 7:00 a.m. July 7th, 1917. The following summer Johnny was kidnapped by Bahdnisians who dyed his hair and skin to make him appear more oriental, then brought him to Bahdnisia and the Temple of the Seven Great Gates where they conducted a mystical ceremony and adorned him with the Eternal Zone of the Zodiac - a belt. They were now prepared to wait until Johnny's seventh birthday when he would inherit world-dominating power. But Bahdnisia's neighbor, Agolea, fearful of the power declared war with Bahdnasia and won. The woman who had originally kidnapped Johnny was now charged with raising him in secret and she took him to a small fishing village north of Brunei, Borneo.

Johnny is now 5 years old and is playing in a fishing boat when a stiff wind accidentally carries him out to sea. He is found by an American freight ship by crewman Congreve who, upon reaching New York City, is charged with taking him to the police. As they board a streetcar, Johnny is recognized by his father, Simon B. Thunder, who now works on the streetcar. He takes Johnny home again.

The week of Johnny's 7th birthday it rains for seven consecutive days all over the Earth. This sign from the heavens lets the High Priest of Aissor know that Johnny is still alive and that the ceremony was successful. He sends people to scour the globe looking for him. Sixteen years later, now 23, Johnny gets a job as a window washer and accidentally summons the the Thunderbolt for the first time saving the life of a fellow washer. This act is observed by Bahdnisians and they ambush Johnny who, once again, accidentally summons the Thunderbolt. Thunderbolt is unable to tell Johnny how Johnny summoned him and Johnny is left to figure it out on his own.

Retrieved from "https://heykidscomics.fandom.com/wiki/Secret_Origins_Vol_2_13?oldid=1496576"
Community content is available under CC-BY-SA unless otherwise noted.