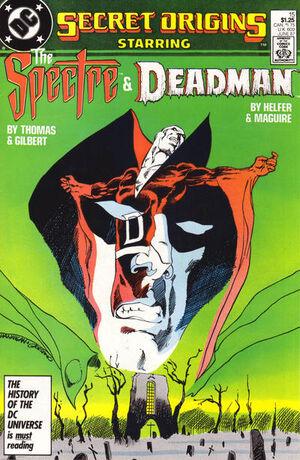 So I have no further use for you. Goodbye, Gat!

Matson is on the roof of a tall building preparing to assassinate Kane, a former astronaut who is riding in a ticker-tape parade, via a high-powered rifle. Matson, however, shoots a member of Kane's security instead. Later, back at the League of Shadow's base, Sensei orders Matson's right hand chopped off by an axe as punishment but allows Matson a chance to redeem himself by finishing the job. Rama Kushna appears and Sensei orders everyone away, after which Sensei's body is vacated by Jonah, Rama's current agent, who has used Rama's gift for his own evil purposes. Rama gives Jonah one final chance to voluntarily undo his evil acts but Jonah is belligerent. Rama sends him to oblivion and instructs Taj-Ze, guardian of her temples, to summon her only willing agents, Vashnu and Maxwell Loomis. They are sent to America to find two men: one who wears a hook and another who wears death like a crown. At JFK Airport, they spot a poster for Deadman, an aerialist of Hills Brothers Circus and recognize him as one of their targets.

At the circus, Boston Brand, a.k.a. Deadman, and Lorna discuss how attendance at the circus is at an all-time low. Vashnu and Loomis arrive under the pretense of looking for work and Loomis has an idea on how to drum up business. The next day, Kane is expected to announce his decision to run for President during an outdoor noon rally. Both Matson, now calling himself "Hook," and Boston arrive early to set up for their plans. During the speech, Hook prepares to shoot Kane when he is blocked by Deadman, sliding down a cable to land on the stage and invite Kane and his entourage to attend the circus tomorrow night. Kane ultimately accepts and Hook decides to try again there.

The next night, the circus is packed and, as Boston prepares to perform, he feels a sudden chill (the presence of Rama though he is unaware of the reason). Rama speaks to Vashnu telling him what to do. Vashnu pleads for Boston's life but Rama is insistent. Loomis arrives stating that he has spotted the Hook and the two leave to confront him. But Vashnu uses his powers to make Hook believe he is really the Sensei and changes the orders from assassinating Kane to assassinating Deadman, which Hook does while Deadman is high in the air. Loomis and Vashnu are upset at Deadman's death but remain to guide his spirit. Boston's spirit realizes he has died and is visited by Rama Kushna.

Appearing in "The Secret Origin of the Spectre"Edit

Synopsis for "The Secret Origin of the Spectre"Edit

February, 1940: Police Detective Jim Corrigan is preparing to attend the party of his soon-to-be fiancee, Clarice, when stoolie Louie Snipe arrives with a tip of a warehouse robbery this night. Jim intervenes capturing several of Gat Benson's gang. Jim calls Clarice from the station and Clarice leaves the party worried that Jim is injured. As they leave the station together, Gat and two of his henchmen capture them. Jim is shot, stuffed in a barrel which is then filled with cement, and dropped off a pier. Jim dies and arrives in Heaven but is denied entry as he was chosen to fight evil for eternity. Jim witnesses Clarice being injured and fatally shot and exacts his revenge on Gat and the henchmen discovering who had hired Gat in the process. He picks up Clarice only to discover his touch heals her wounds and she awakens. Jim convinces her it was just a dream.

At her house, Jim pretends he no longer loves Clarice in order to distance her from him. He pleads to the voice that he be allowed eternal peace and the voice says it will consider his request but points out that Clarice is still in danger. Jim transforms into the Spectre's appearance and rushes to her aid. At the house, the Swami pretends to summon the spirit of Clarice's ancestor but the Spectre arrives and exposes the Swami as a hoax. In retaliation, Swami, who had hired Gat to kill Corrigan before he could reveal Swami as a hoax, shoots Clarice but time is frozen before the bullet can impact. The voice returns offering the Spectre a choice: eternal rest (but he cannot intervene in the bullet's path) or eternal mission of fighting evil. Spectre chooses to save Clarice and fight evil on Earth. He catches the bullet, traps the Swami's soul in a mirror and then shatters the mirror using the bullet. Spectre leaves as Clarice again mistakes the recent events as another dream.

Retrieved from "https://heykidscomics.fandom.com/wiki/Secret_Origins_Vol_2_15?oldid=1505028"
Community content is available under CC-BY-SA unless otherwise noted.