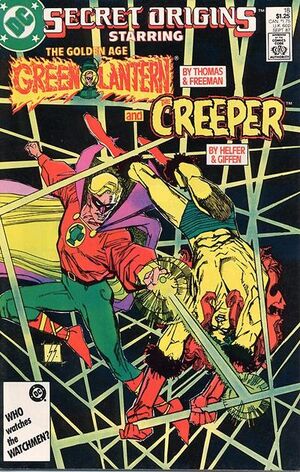 Appearing in "The Secret Origin of the Creeper: Before and After Science"Edit

Synopsis for "The Secret Origin of the Creeper: Before and After Science"Edit

Synopsis for "A Secret Origin of the Golden Age: The Tale of the Green Lantern"Edit

Two-thousand years ago a green meteor came to Earth and landed in the provinces of China. An ageing occultist named Chang discovered the meteor and listened to its spectral promises of death, life and power each time the Green Flame of Life flared. Cutting away a portion of the alien rock, Chang fashioned it into a small lamp. The neighboring villagers distrusted the sorcerer and before long, a mob gathered together and killed him. The Flame of Life fulfilled the first of its prophecies by killing Chang's assailants.

The lamp traveled across the globe for centuries until it eventually fell into the hands of a mental patient named Billings. Billings remolded the lamp into the shape of a train conductor's lantern. The Green Flame of Life flared again and mystically restored Billings' sanity – granting him a new lease on life. As promised, the second of three prophecies has been fulfilled.

Only a few short years later, the Flame of Life fulfilled the third part of its prophecy. Engineer Alan Scott and his colleague, Jimmy, travel aboard a train across the American Midwest. Alan is present to inspect the recently designed Trestle Bridge. Alan recently outbid a rival engineer named Alert Dekker for the Trestle Bridge contract, and Jimmy is concerned that Dekker might try to sabotage the bridge's test trial. Alan assures him that there is nothing to worry about.

As fate would have it however, a bomb explodes beneath the bridge derailing the train. Everyone on board is killed in the explosion – everyone but Alan Scott. Alan awakens and finds a strange emerald lantern resting near the wreckage. Now the Green Flame of Life flares for a third time granting the gift of power to Alan Scott. Following the lantern's instructions, he cuts away a small piece of the lamp and molds it into a ring. The Flame of Life instructs that in order to effectively wield his power, he must charge his ring with energy from the lantern, once every twenty-four hours.

With this fantastic new power under his command, Alan sets out to find Albert Dekker – the man responsible for blowing up the Trestle Bridge. Glowing like a green phantom, he phases through the walls of Dekker's office and forces him to take responsibility for the bridge's destruction. Moments after Dekker confesses to his crimes, he falls away dead from fright.

Alan decides to use his newfound powers and tools to fight crime as a man of mystery. He becomes... the Green Lantern.

Honing his newfound powers, Alan soon embarks upon another adventure. He attends the New York World's Fair. At the Cafe Condor, he sees a young woman preparing to shoot a man sitting at another table. Alan disarms her and takes her outside. The woman introduces herself as Irene Miller. The man she was prepared to shoot is a gangster named Murdock. Irene explains that her brother Danny once belonged to Murdock's mob, but decided to quit the organization and go straight. Murdock was resentful of Danny's decision so he framed him for a drunken driving incident, which resulted in the death of a pedestrian. Alan tells Irene that he knows a friend who might be able to exonerate her brother.

Alan charges his ring and changes into Green Lantern. He first stops at the state prison and finds Danny Miller to get his side of the story. He tells Danny that he will bring Murdock to justice and clear his name.

Later, Murdock's thugs stage a riot at the fairgrounds distracting some police officers, enabling some of his other goons the chance to rob the proceeds from the Hall of Music. Green Lantern arrives and chases after the thugs as they make their getaway. He causes their vehicle to crash, then interrogates one of the thugs. The criminals race back to their boss Murdock, and Green Lantern silently tails them. He discovers that Murdock has been blackmailing a judge named Homer Wake in order to get permits to set up their racketeering operation at the fairgrounds. He also learns that Murdock has kidnapped the judge's young daughter and is holding her captive.

Murdock believes that Wake is the reason why Green Lantern has been interfering their affairs and sends a hitman to silence him. Green Lantern arrives at Wake's home and stops the thug from killing the judge. He then uses his ring to learn where Murdock is holding Wake's daughter.

Returning to the fairgrounds, Green Lantern finds the young girl inside a small room at the Perisphere. Murdock arrives and the two get into a fight with each other at the top of the building. During the scuffle, Murdock loses his footing and plummets to the ground below. Before dying, he confesses to framing Danny Miller and Miller is freed from prison.

Retrieved from "https://heykidscomics.fandom.com/wiki/Secret_Origins_Vol_2_18?oldid=1501412"
Community content is available under CC-BY-SA unless otherwise noted.