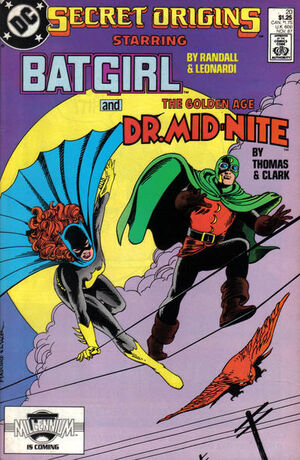 He thinks leaping from the roof will lose me. He's wrong.

Batgirl is prowling the rooftops of Gotham City in pursuit of a fast-paced thief with a power pack. She eventually catches him, only to discover that he is a young teenager. Shocked by his age, Batgirl lets him go free with a stern warning, but the incident reminds her of the paths she traveled to become Batgirl.

Flashback:
When Barbara Gordon was a little girl, she lived with her family in Ohio. Her best friend was a girl named Marcie, and together they fantasized about one day becoming powerful super-heroes. During one such escapade, Barbara learned some shocking news. Her mother, Thelma, had been killed along with her aunt in an automobile accident. As bad as things were for Barbara, they were even worse for her father, Roger. Roger began drinking heavily and taking his aggression out on Barbara. A few years later, Roger's drinking and self-abuse finally took its toll on him, and he passed away.

Barbara left Ohio to stay with her uncle James Gordon and her aunt, Barbara, in Gotham City. Barbara was excited about living in the same city as the legendary Batman, and took every opportunity to learn as much about the caped crusader as she possibly could.

When Barbara was thirteen-years-old, she snuck into her father's darkened office to find him conversing with none other than the Batman. Before leaving, Batman surrepticiously left a note behind for Barbara to find. It read, "Don't get caught. He'll get angry."

The following morning, Barbara decided that she wanted to learn self-defense. She convinced her adoptive father to allow her to enroll in a karate class. Like everything else, Barbara excelled in class and quickly became the envy of her instructors.

More importantly than her martial prowess however, was her academic achievements. She earned top scores in high school, and was able to graduate two years early. At sixteen, Barbara became the youngest student to ever enroll at Gotham State University. She graduated with honors and accepted a job as a research librarian at the Gotham Public Library. Before long though, she was ready to live her true dream.

The police officers of Gotham City were hosting a Policeman's charity costume ball. In attendance were many of the city's wealthiest patrons including, Bruce Wayne. Barbara fashioned her own costume, and decided to crash the party as Batgirl. When she arrived, she found that a costumed criminal called the Killer Moth and his cronies had been planning on raiding the event, and stealing the proceeds. Batgirl swung into action for the first time and succeeded in driving Killer Moth away. Batman arrived at the scene and admonished Batgirl for her reckless behavior.

Despite his harsh criticism however, Barbara continued to adventure as Batgirl for several years. She eventually earned the Dark Knight's respect and approval and accompanied him (as well as Robin the Boy Wonder) on several missions.

After a brief stint as a super-hero, Barbara decided to retire as Batgirl to pursue a career in politics. She became the youngest politician ever to hold a seat in the United States Congress and served for one full term.

Following her foray into politics, Barbara partly came out of retirement and donned the cape and cowl once again.

Appearing in "The Secret Origin of Dr. Mid-Nite"Edit

Synopsis for "The Secret Origin of Dr. Mid-Nite"Edit

Doctor Charles McNider is one of the most renowned surgeons in the New York area. Working alongside him, is his trusted nurse and companion, Myra Mason. One evening, a harried police officer calls upon McNider's services. He tells him that an important witness against criminal gangster "Killer" Maroni has just been shot and may die. McNider races to the hospital to save his life.

During the operation, one of Maroni's thugs, Mike, climbs the fire escape outside the building and lobs a hand grenade into the room. The explosion kills everyone except for Dr. McNider, however he is rendered permanently blind from the attack.

A few nights later, McNider is resting in his study when a wood owl crashes through the window onto the floor. Shocked by the disturbance, Charles rips the bandages from his eyes and discovers that he can see perfectly well in the dark. However, he is still completely blind when in the presence of natural light. He mends the injured bird and names him Hooty.

McNider decides to use his unique night vision powers to become the latest in a growing line of mystery men. Naming himself Doctor Mid-Nite, he takes to the streets with a pair of special infrared goggles, and an arsenal of custom made Blackout Bombs.

Doctor Mid-Nite learns that Killer Maroni has attempted to take another life. He tracks the gangster down to his townhouse and uses his Blackout Bombs temporarily blind Maroni's men in a flash of black smoke. While the thugs' perceptions are obscured, Doctor Mid-Nite easily takes them down. After doing away with the hired help, he apprehends Killer Maroni and brings the gangster to justice.

Retrieved from "https://heykidscomics.fandom.com/wiki/Secret_Origins_Vol_2_20?oldid=1526672"
Community content is available under CC-BY-SA unless otherwise noted.