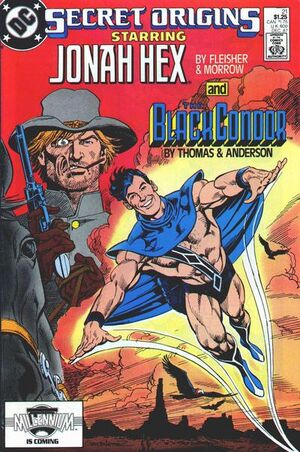 We will not need the police. Not so long as we have the restless spirit of Jonah Hex to protect us.

Appearing in "Requiem for a Gunfighter"Edit

Synopsis for "Requiem for a Gunfighter"Edit

A movie crew is filming at the Frontier City Amusement Park in Laramie, Wyoming. An actress named Nadine is rehearsing her scenes when she accidentally knocks over a prop figurine. The figure turns out to be the stuffed remains of the famous frontier bounty hunter, Jonah Hex. One of the executives, Mister Kastner telephones Professor Lawrence at Princeton University, informing him of their miraculous find.

News of the discovery hits the wire and before long, several people become aware of the existence of Jonah's missing corpse. A rich, private collector named Mister Lewellyn prides himself on being an expert on 19th century western Americana. He has the most extensive collection of Jonah Hex memorabilia in the world. He wants Hex's body, but learns that Jonah's common law wife, Tall Bird, is still alive and is making a claim on the body.

Tall Bird lives at the Gray Eagle Indian Reservation in Wyoming, and wants to give Jonah a proper Native American funeral. Professor Lawrence flies out to Wyoming to interview Tall Bird. As Jonah's stuffed corpse stands stoically behind her, Tall Bird reveals the secret origin of Jonah Hex.

Jonah Hex was born in 1834 to an abusive father named Woodson Hex. When Jonah was ten, his father presented him with a rifle for his birthday. That night, Jonah witnessed his drunken father beating up his mother, Ginny. This was the pattern of Jonah’s life for many years.

Woodson eventually sold Jonah to a tribe of Apache American Indians. Although he befriended Apache Chief, he made enemies with his son, Noh-Tante. During a fight between the two, Noh-Tante attacked Jonah with his tomahawk ruining the right side of his face.

Years later, Jonah left the tribe to join the Confederate army. After the war, he realized that his gun slinging skills could be better served earning him money and so he became the world's most fearsome bounty hunter.

In 1904, a man named George Barrow found the aging Jonah Hex and shot him in the back with a shotgun, killing him. Jonah’s remains were stuffed and eventually sold to a Wild West frontier exhibit. The body was missing for years, but eventually fell into the possession of the Frontier City Amusement Park.

After telling her story, Tall Bird is shocked to find Mister Lewellyn and his men on the reservation. Lewellyn holds Tall Bird and Professor Lawrence at gunpoint and tells them that he will kill them both and forge her signature in order to legally claim Jonah's corpse. Suddenly a shot miraculously fires from the .45 stuck in Jonah Hex's lifeless hand and Mister Lewellyn falls over dead. Professor Lawrence picks up Lewellyn's gun and keeps the other henchmen at bay. Tall Bird is now able to give her husband the burial she feels he deserves. No explanation is given as to how Jonah's gun mysteriously fired.

Hex body count: 2 (one in flashback)

Appearing in "The Secret Origin of Black Condor"Edit

Synopsis for "The Secret Origin of Black Condor"Edit

An archaeologist and his family trek outer Mongolia, and are ambushed by raiders. Realizing their plight, the mother hides her baby behind some rocks. The raiders savagely massacre everyone, yet unnoticed, a giant condor swoops and gathers the child and brings it to its nest. The child grows to be a boy, and studies the movement of wings, body motion, air currents, balance and levitation. He soon becomes a companion of the air and seeks to use his gift toward aiding man.

Retrieved from "https://heykidscomics.fandom.com/wiki/Secret_Origins_Vol_2_21?oldid=1456972"
Community content is available under CC-BY-SA unless otherwise noted.