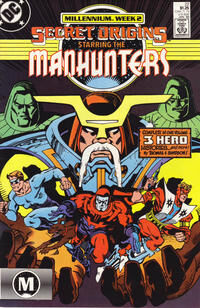 No man escapes the Manhunters!

Appearing in "No Man Escapes the Manhunters!"Edit

Synopsis for "No Man Escapes the Manhunters!"Edit

This issue focuses on the origin of the robotic Manhunter Cult, beginning with their creation at the hands of the Guardians of the Universe. It shows their conflict with the Guardians' rigid structure and their ultimate rebellion. To combat the renegade Manhunters, the Guardians created an agency of sentient peace-keeping officers which came to be known as the Green Lantern Corps. Through the centuries, the Manhunter have used sleeper agents to carry on their work including those who have even adopted the name "Manhunter" such as Dan Richards, Paul Kirk and Mark Shaw.

Retrieved from "https://heykidscomics.fandom.com/wiki/Secret_Origins_Vol_2_22?oldid=1456973"
Community content is available under CC-BY-SA unless otherwise noted.