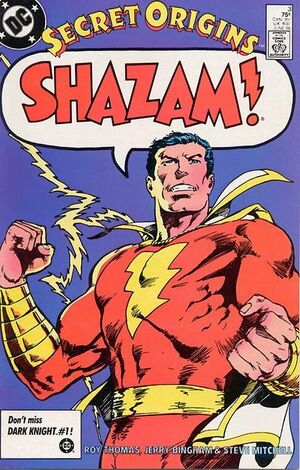 Billy Batson was a homeless orphan peddling papers near a subway station in Fawcett City around the late 1930s when a mysterious shadowy stranger approaches him on a rainy night, leading him down into the station where a train takes them to a cavern where Billy sees an old man sitting on a throne with a giant block of stone hanging above him hanging by a fraying thread. The old man calls out Billy's name, referring to himself as Shazam, a man given incredible sorcerous powers which he demonstrates by showing he had been watching Billy's life -- his being left to his uncle Ebenezer Batson when he was a child and his parents died, and his being thrown out into the streets later on so his uncle can cash in on Billy's inheritance. Shazam says that he is getting old and that he needs a young man like Billy Batson to take his place as his champion. He tells Billy to "say my name", which Billy does -- and instantly, a lightning bolt strikes Billy, transforming him into a man with a red and gold suit and a white cape with gold trim. Shazam tells Billy that he is now Captain Marvel, and that his job is to use this power for the cause of good. Shazam tells Captain Marvel to say his name again, which he does -- and as lightning strikes Captain Marvel, the thread snaps and the block of stone falls on Shazam, crushing him to death. Billy finds himself back outside the subway station as himself again, wondering if the whole thing he experienced was just a dream.

The next day, Billy investigates a news article he read in the local paper about a mysterious person threatening to silence the air waves with a radio silencer if his demands weren't met by midnight that night, hoping to gain the "job offer" by WHIZ's Sterling Morris of being a news announcer for that radio station. In following the two men that Billy suspected were cohorts behind the mystery person, however, he couldn't enter their hotel room as Billy Batson, nor could he reach a high enough place from an adjacent building to see into their room. In frustration, Billy shouted out "Shazam!" -- and instantly, he was transformed into Captain Marvel, making him realize that he truly was given those powers. He jumped over to the ledge near the window outside the room and watched as the "mystery person", who turned out to be Dr. Thaddeus Bodog Sivana, appeared to the men via television screen, having them get ready to activate the radio silencer. Before the countdown reached zero, however, Captain Marvel burst into the room, grabbed one of the men, and threw him into the radio silencer, destroying it. The other man pulled out a gun and tried to shoot at Captain Marvel, but the bullets only bounced off his chest. He soon tried to make a run for it by getting into the elevator, but Captain Marvel grabbed the elevator car cable and pulled the other cohort back up to his floor and knocked him out with a single punch. Dr. Sivana promised Captain Marvel that the "Big Red Cheese" hasn't seen the last of him, before the television screen was destroyed.

Changing back into Billy Batson by saying "Shazam" again, he phoned in the evidence he found to Sterling Morris, who was impressed by the young man's discovery and then gave the boy the job he promised at WHIZ.

Retrieved from "https://heykidscomics.fandom.com/wiki/Secret_Origins_Vol_2_3?oldid=1456954"
Community content is available under CC-BY-SA unless otherwise noted.