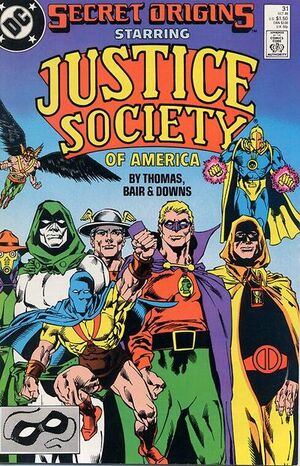 We are not part of an army. We fight only in the cause of justice... and that will give us our name... Justice Society of America!

Appearing in "The Secret Origin of the JSA"Edit

Synopsis for "The Secret Origin of the JSA"Edit

During 1940-Nov-09th (Saturday) thru (at least a week later): Hitler's Operation Sea Lion was pushed forward to late 1940; FDR's response was to direct MI-5 agent Smythe to try to contact one or more of the eight "mystery men" described in a dossier. Smythe got Gotham City Police Commissioner Davis to contact Green Lantern, and The Flash spontaneously showed up at their meeting, after hearing a rumor from a Keystone City Pennsylvania cop. Smythe persuaded them to fly with him to Scotland, to McMurdie Castle near Glasgow, which they did, Green Lantern style. The castle was an Abwehr base, commanded by Major Streicher. GL&F burst in and made short work of Streicher's henchies, but he activated a giant robot, der Mordmaschine aka the Murder Machine, which was SO quick and strong that it outfought Green Lantern AND the Flash, knocking them both out! In his windowless tower in Salem Massachusetts, Doctor Fate observed this outcome in his crystal orb, and flew forth to New York City, to recruit Hourman, whom he found in the triumphant moment of having trashed a gang of hoodlums. Fate knew Hourman's secret ID already. He cast a mystic whammy, and the very skeptical and belligerent Hourman was suddenly flying along in his wake, destination unknown.

By this time it must have been 1940-Nov-10th (Sunday), Europe Time: Scott & Garrick, drugged half senseless, had been moved from Glasgow to Berlin; there was Hitler having a big rally in the city square, celebrating their impending executions, to be accomplished with the Spear of Destiny itself. Suddenly Green Lantern's ring (which was not yet out of charge) blazed up, plus some atmospheric fireworks happened, and two super heroes in bright yellow capes showed up to interrupt the party: Doctor Fate and Hourman! Hourman was not out of charge, that's for sure! There was a quick violent rescue, but before the good guys could get any real traction, Hitler did some magical hoodoo with the Spear, and summoned forth from the stormy skies The Valkyries! Five of them. Green Lantern tried to use his ring on Hitler, who simply deflected the whammy with the Spear of Destiny. Then Doctor Fate confronted Gudra in mid-air, and she swatted him away with her spear, while another one's horse swatted the Flash with its wing, but G.L. caught him. The Valkyries wheeled and flew west, towards England, and Hitler ordered his navy to put to sea. Green Lantern and Hourman each engaged one of the flying horsewomen while Fate returned to the fray, first sending four comet-looking magic whammies to America, in search of reinforcements.

In New York City, it was night, and two weird flying lights veered in, one to land on the Sandman, who had just finished wrapping up a kidnap gang, and one to intercept Hawkman, who was mulling over the prospect of equipping his girlfriend with Nth metal accoutrements, [which he would only get around to doing one year later]. In Calvin City, the Atom was likewise scooped up in a man-sized golden bubble. All three heard the voice of Doctor Fate, briefing them on the situation in Europe. And Fate's fourth probe soon found The Spectre, hovering near the Moon, but first the three masked Americans arrived at Dover, where it was also night, and a very large number of German marines and aircraft were attacking a British defensive position. Sandman and the Atom pitched in on the ground fighting, and Hawkman attacked the bombers with a swordy-looking chopping weapon of some kind. They were making about as much difference as you'd expect, until suddenly The Spectre loomed onto the scene.

Hitler ordered Professer Stauffen to launch his experimental aircraft (a long range 2-engine bomber, seemingly a souped-up DO-217) to obliterate the American capital. Dr.Fate showed this scene, in Berlin, to his costumed allies, still in combat at Dover, off the coast of which the 100-foot tall Spectre was annihilating the German invasion fleet with gusto. Then shrinking down to human scale, he conferred with Hawkman, Atom, and Sandman.

Meanwhile in Berlin, the Valkyries had vanished, and reappeared at whatever airfield this Stauffen bomber is taking off from, so Dr.Fate adjourned his group to Dover, where they all had a confab. Their task was obvious: the bomber must be stopped. With Green Lantern conveying the non-fliers, they quickly found the bomber, now escorted by the five Valkyries, and Hawkman led the attack, closely followed by Dr.Fate. The Valkyries intercepted Hawkman & Dr.Fate, while Green Lantern hung back with four passengers on his hovering green platform. Suddenly the clouds ahead parted and Washington DC was visible!

Hitler has used the Spear of Destiny to distort time and space in his favor. Worse yet, Gudra's remarks began to affect the morale of Hawkman himself, but Doctor Fate's remarks rallied the spirits of the costumed heroes, especially Green Scott's, and he flared up a power-ring whammy that destroyed the Nazi bomber. Alas, he himself was a bit too close to it, at that moment, and the onboard bombs all detonated, causing a concussion that knocked him unconscious. Flash, Sandman, Hourman, and the Atom were fortunate (or more likely were guided by Fate) to land uninjured, and Atom was on the White House lawn.

Suddenly four of the five Valkyries vanished, their mission having failed, but not before Gudra flew out of the fight, westbound, quicker than even The Spectre could track her trajectory. (How fast IS that?) Soon, Gudra had dismounted and entered the White House and was stalking FDR. Atom Pratt was stalking ... well, he knew not what, just a hunch, but he arrived at the Lincoln Bedroom in the nick of time to keep Gudra from spearing FDR, by taking her point in his own back. Or so it seemed, to both of them. She then used the same magicked-up spear (which was neither Gungnir nor Destiny) to slay Roosevelt.

Hourman and Doctor Fate rushed into the room, too late. Fate whammied up some SFX and knocked Gudra across the room, and she turned to flee, while also fading into nothingness. Hourman checked out the Atom, who was incredulous at finding himself alive; Sandman and Flash check FDR, who was quite dead. The Spectre and Doctor Fate were both stymied now, and yet ... The Spectre must try!

And so The Spectre went to that twilight land where mortal men may only tread but once, and he pierced the veil and so on and so forth until he found the spirit of FDR, marching towards the blinding light, and Spec had a spirited discussion with The Voice, with defiance and bravery and sacrifice and tears and stuff, and The Voice relented, and allowed Roosevelt to return to Earth alive.

Suddenly it's a few minutes earlier, and they're back in the Oval Office, and FDR is lighting a cigarette, and all present have a somewhat muddled memory of these last few moments. FDR hopes this group will stay together, Sandman and Hourman think that's not so feasible, Flash thinks it's at least worth discussing over dinner, Hawkman thinks they'd make a special super battalion, but The Spectre echoes the Superman of Earth-2 in noting that they're not part of any army but fight only for justice, hence should be called The Justice Society of America.

Retrieved from "https://heykidscomics.fandom.com/wiki/Secret_Origins_Vol_2_31?oldid=1456982"
Community content is available under CC-BY-SA unless otherwise noted.