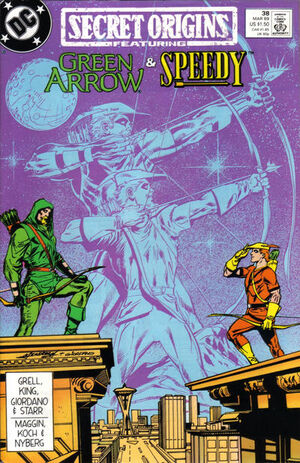 Hmph! "Modern-Day Robin Hood." What am I supposed to do? Steal from myself and give to the poor?

Appearing in "Sometimes a Fool Notion"Edit

Synopsis for "Sometimes a Fool Notion"Edit

As Oliver Queen struggles to survive on Starfish Island, he recalls his meeting with his hero Howard Hill on a sea cruise, where his interest in archery was rekindled. Finally, he creates his own bow and arrow, and manages to kill a lizard for food successfully. As he eats the lizard, he recalls how he had fallen over the side of the boat while drunkenly vomiting, and wound up stranded on the island.
Later, after having returned from the island, Oliver's manservant Wilson encourages him to return to work at Queen Industries lest the board of directors seize control from him. Oliver declines, for today, at least. Instead, he and some friends engage in a modified version of golf, in which they fire blunted arrows at a golf ball, rather than putting. Oliver's arrows aren't blunted, and it instead pierces the ball, and becomes lodged in it. As he plays, Oliver recalls how he had caught two marijuana growers on the island, and used them to get back to civilization.
Later, Oliver attends a costume party in support of the March of Dimes, dressed as Robin Hood. He feels like an outsider, however, missing the quiet of the island. He decides to get some air on the balcony. However, his reverie is interrupted by a thug named Lester "The Gooch" Norton, who holds a woman hostage in order to gather the party-goers' valuables and their charitable donations. Feeling the need to do something, Oliver hesitates when it comes to firing his arrow at Norton. Instead of injuring the thief, Oliver pins his tie to a tree. Of course, the Gooch recovers easily, and trains his shotgun at him.
Oliver pulls an arrow from his quiver, only to discover that it is the arrow that was lodged in the golf-ball. With little time left, Oliver aims for the Gooch's head, but the ball's weight creates an arc, and the arrow nails his target in the groin, thoroughly incapacitating him. Oliver collects his new lucky arrow, and knocks the Gooch out, delivering him to the police. As they take him away, the Gooch refers to Oliver as "that big, green, arrow-guy," much to his chagrin.


Later, Oliver is disgusted to see that the news media has dubbed him "Green Arrow". Even so, he must admit to himself that stopping the crime was a lot of fun. He decides to keep the Robin Hood costume, and keep fighting crime using trick arrows.

Appearing in "The Kid That Couldn't Shoot Straight"Edit

Synopsis for "The Kid That Couldn't Shoot Straight"Edit

Reading a retrospective on his life in a magazine, Roy Harper recalls his past on a Navajo reservation. He had trained hard, and grown strong young, but his determination didn't make him any friends. He had idolized Green Arrow from a distance, imagining that the hero was his real father. He recalls how he met Green Arrow, finally, at an archery contest on the reservation.
Roy had lost the competition because the other boys had tampered with them, so that they would veer off course. Even his friend Brave Bow had gone along with the ploy, because he was sick and needed someone to care for him. The next day, though, Roy noticed a gang trying to steal from a souvenir shop he worked at, and rushed out with his bow to stop them. Oliver Queen happened to be nearby, but Roy beat him to the scene. Then, Roy saved Oliver from being shot by a man with a gun. Soon after, Oliver decided to take Roy on as a partner, and call him 'Speedy,' because he got there first.
Later, Roy recalls his training in the Queen Mansion, which was tough. However, after training, he would get to ride around in the Arrowcar as Speedy. Unfortunately, the Arrowcar featured a gimmick which would catapult him high into the sky, for some plan that he was never informed of. Still, when the Queen fortune was swindled, Oliver embraced the fact that they were no longer rich. Roy, on the other hand was depressed by it, and used his education trust fund to buy drugs. Then, when Oliver went on the road with his friend Hal Jordan, he had felt neglected and turned to heroin use. Roy has no recollection of his being saved by Ollie and Hal, because the drugs damaged his memory.
Roy then joined the Teen Titans, but their dramas and politics drove him out. While on an undercover government job, he met Cheshire, and they had sex, despite the fact that she was a villain. Despite the fact that his relationship with Cheshire was short-lived and antagonistic, Roy is happy to have his daughter Lian as a result. He wonders what of his past he should tell his daughter when she's older, and decides that ultimately, he will teach her to do justice, love mercy, walk humbly, and shoot straight.

Retrieved from "https://heykidscomics.fandom.com/wiki/Secret_Origins_Vol_2_38?oldid=1456989"
Community content is available under CC-BY-SA unless otherwise noted.