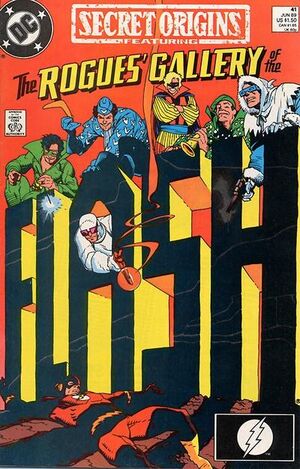 Appearing in "A Rogue By Any Other Name"Edit

Synopsis for "A Rogue By Any Other Name"Edit

Gorilla Grodd, trapped in human form and suffering from amnesia, wanders around Central City when his memory slowly starts to return. He spots the costumes of several of the Rogues in Paul Gambi's tailor shop and enters. Paul recounts the origins of several of the Rogues to see if one triggers a memory. Meanwhile, Solovar mentally contacts the Rogues who assemble and prepare to defeat Grodd. Grodd does recall who he really is, upon hearing the name "Flash" but does not physically transform. He implores Gambi to make him a Grodd suit, which he does. The Rogues soon arrive and they battle Grodd whose physical transformation soon occurs. Grodd is still taken down and Solovar prepares to take him back to Gorilla City thanking Gambi for his help in stalling Grodd's memory return by distracting him with the stories of the Rogues.

Retrieved from "https://heykidscomics.fandom.com/wiki/Secret_Origins_Vol_2_41?oldid=1456992"
Community content is available under CC-BY-SA unless otherwise noted.