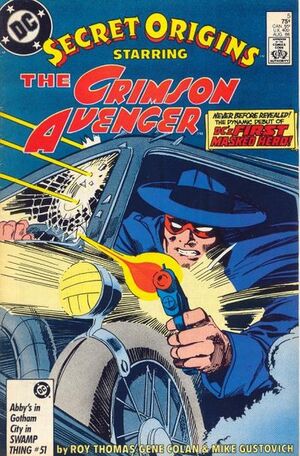 Appearing in "The Crimson Avenger"Edit

Synopsis for "The Crimson Avenger"Edit

During the eve of the The War of the Worlds radio broadcast by Orson Wells, a newspaper publisher named Lee Travis is being interviewed by a magazine reporter named Claudia Barker. Though they seem to not get along, they agree to meet again at a masquerade ball later that evening.

Travis goes to the event costumed as a masked "Highway Robber," completed by borrowing his driver's gun.

At the party, everyone gathers around the radio to hear the news about a world teetering on the brink of disaster -- the Martians have landed.

Suddenly the party is interrupted by a few Martians with guns, demanding that the guests hand over their valuables. Travis quickly realizes, these are no Martians, but really a gang of criminals taking advantage of the War of the Worlds broadcast. Claudia realizes it too, but when she confronts the "Martian" gang leader, she is shot and killed. The fake invaders make their escape with Travis and his driver giving chase. They're able to corner them, but the gang leader is about to shoot down Travis. However, the costumed leader is suddenly blasted by a shotgun from behind by Bill Dock. Still in his masquerade costume, Travis drives off from the scene, believing that fate as shown him a way to continue his fight for justice.

Retrieved from "https://heykidscomics.fandom.com/wiki/Secret_Origins_Vol_2_5?oldid=1456956"
Community content is available under CC-BY-SA unless otherwise noted.