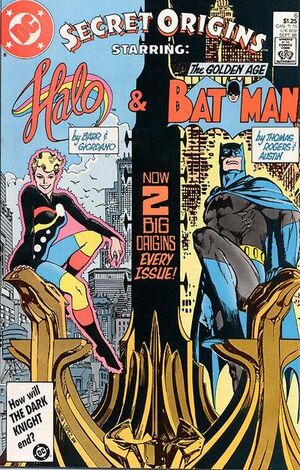 Bruce Wayne is giving up his life-long dream of devoting his life to the fight against crime... a gauntlet that will be taken up by someone known only as -- The Batman!

Appearing in "The Golden Age Batman"Edit

Synopsis for "The Golden Age Batman"Edit

The Batman of the Golden Age is a forgotten hero. His parents were killed by a criminal, and he died decades later at the hands of a criminal. His Earth was swallowed by a cosmic catastrophe, and replaced by another universe, but his legacy lives on.

In 1924, Thomas Wayne and Martha Wayne exit a movie theater with their son Bruce Wayne. They are approached by a mugger, who demands Martha's necklace at gunpoint. Thomas Wayne demands the mugger leave his wife alone, and advances towards him. The mugger shoots Thomas Wayne dead, then grabs the necklace and throws Martha to the ground. Martha gasps "my heart" and also dies. Bruce is left alone in the street as the mugger runs away. Later, Bruce is taken in by his uncle Philip. Philip reminds him to say his prayers before bedtime, and Bruce swears an oath to avenge his parents. He declares that he will spend the rest of his life warring on all criminals, and asks God to help him keep his promise.

Bruce grows older, and has difficulty making friends at the private school Hudson Academy. This is because he worries that anyone else he loves might also be taken from him. In college, he is praised as a brilliant student, but his advisor tells him to develop more of a social life. Bruce Wayne spends three years in college as a loner, becoming a master of science and technology while training his body to physical perfection. He becomes involved in the theater department, where he meets Julie Madison during a production of Hamlet. Madison is playing Ophelia, and Bruce is playing Polonius because he prefers character parts over trying out for the leading roles. Bruce and Julie begin to fall in love. Bruce tells Julie that he plans on becoming a police officer after graduation, but she tells him he should pursue acting professionally. Bruce insists that his theater roles are just preparation for undercover work. Bruce and Julie are cast as the title roles in Romeo and Juliet, where they share their first kiss. Julie is deeply in love with Bruce, but does not understand his obsession with criminology. They graduate in 1939, as America is still entrenched in the great depression. Julie leaves to pursue acting on Broadway, and asks Bruce to come with her, but he decides to stay in Gotham and pursue police work.

Returning to his inherited penthouse in Gotham City, Bruce Wayne is brooding and indecisive. He wants to serve and protect Gotham, but isn't sure how to do it. Julie sends him a letter to say that she loves him, but she can't be involved with someone who's constantly putting himself in danger. Bruce does not feel content to stay behind the scenes while others place themselves in harm's way. Bruce worries that he is not cut out for detective work, and decides to try some amateur sleuthing in disguise so Julie won't find out. He knows that criminals are a superstitious and cowardly lot, so his disguise should be one designed to strike terror into their hearts. He must be a creature of the night, black and terrible. Just then, a bat flies into his open window. Bruce takes this as an omen, and decides that he will become a bat. To make his costume, Bruce rents a room at Gotham's Plaza Hotel. He disguises himself as an old man, and hires the two finest costume-makers in Gotham. They labor all night to create a batsuit, and he gives them extra money to buy their silence.

Bruce Wayne puts on his costume and patrols the city's rooftops, unsure of whether or not he's ready to fight crime. The first criminal he sees is a thief sneaking into a warehouse. The thief is shocked and exclaims "What the Hell's that? A man dressed like a giant bat!" Bruce swings down to kick the thief, and replies "In other words, friend -- a Batman!" The thief surrenders and claims that his leg was busted when he fell. Bruce comes closer to take a look. The thief hits him in the head with a hammer and runs away. Bruce notices white particles left behind as the thief ran through a freshly paved street. Using his chemistry knowledge, this leads him to the abandoned Gotham Glass Works. The thief is waiting for Bruce, and throws a net on top of him. Bruce is tied up and left in the basement, but he uses a bucket of rouge to help him slip out of his bonds. By tricking the thief with a mirror, Bruce surprises his captor and knocks him out with a punch. The GCPD find thief "Slugsy" Kyle tied to a lamp post, with a sign reading "This is for you. The time has come for the Batman."

His first experience crime-fighting leaves Bruce proud but rattled. He decides that he might be better off doing deskwork, and calls Julie to tell her the good news. Julie is busy with rehearsals, but they arrange to talk the following night. Bruce is excited to tell her that he wants to move to New York and get married. To take his mind off things, he pays a social call to his uncle Philip's friend Commissioner Gordon. Bruce plans on asking Gordon for a recommendation to the NYPD. They smoke together while Gordon tells Bruce the puzzling story of the Batman. Gordon receives a phone call telling him that David Lambert, the chemical king, has been stabbed to death. Gordon takes Bruce along to the Lambert mansion, where Sgt. Farraday has the victim's son John Lambert in custody. Gordon interrogates John Lambert, who insists he is innocent. John Lambert explains that he walked in to find his father stabbed with the safe and window both open. David Lambert's last word was "contract" as he died in his son's arms. John Lambert tells Gordon that his father's three business partners in the Apex Chemical Corporation were Steven Crane, Paul Rogers, and Alfred Stryker. They receive a phone call from Steve Crane, who explains that David Lambert and him both received anonymous death threats. Bruce tells Gordon he is leaving so he won't be away. Steven Crane is shot dead by an intruder, who steals a paper from his house. The killer climbs onto the rooftop to meet with his accomplice. Batman appears, and the crooks recognize him from reports on the radio. Batman quickly knocks out the crook with the gun, and then takes down the other who is wielding a switchblade. The cops arrive to see Batman on the roof, and they assume he is involved. Gordon names Batman as their prime suspect, and the police rush to find Lambert's other partners. Batman escapes to his license-less automobile, and smiles as he reads the stolen paper. Paul Rogers learns of these murders on the radio, and visits the laboratory of Alfred Stryker. Rogers is greeted by Stryker's assistant Jennings, who hits him over the head and knocks him out. Jennings ties Rogers up and locks him inside a gas chamber to kill him. Batman enters through the skylight and throws a wrench at the gas chamber, rescuing Rogers. Jennings pulls a gun on Batman, but Batman knocks him out. Alfred Stryker enters the room, and Rogers explains that Jennings is the murderer. Stryker draws a knife and announces that he will kill Rogers then throw his body into a tank of acid. Batman surprises Stryker from behind and knocks the knife out of his hand. Batman explains that Stryker had made secret contracts with his three partners to buy out their shares over time. Stryker grew tired of waiting, and had fallen short on cash, so he decided to simply have his partners killed and their contracts stolen. The contracts were a secret, so nobody would have suspected him. Stryker breaks out of Batman's grip and announces that he could never face the disgrace of prison. Batman yells to caution Stryker, but Stryker carelessly trips through a wooden railing and falls to his death in a vat of acid. Batman remarks that this is "a fitting end for his kind." Batman leaves through the skylight before Rogers can thank him. Gordon returns home after midnight to find Bruce Wayne feigning insomnia. Gordon tells Bruce how the Batman turned out not to be a criminal, and actually helped them solve the case. Bruce feigns disbelief and says that this sounds like a fairy tale. Bruce leaves, and Gordon is privately disappointed that such a nice chap seems so disinterested in everything. Gordon is also surprised that Bruce never asked him about putting his criminology training to work.

Julie Madison receives a phone call from Bruce at 3am. Bruce tells her that he isn't cut out for being a cop, not even sitting behind a desk, and will have to find a new career. Bruce makes plans to visit her in New York the next week, where he plans to propose. They say goodnight, and Bruce puts on his costume again. He does not want to lose Julie, but he also does not want to spend his life shuffling papers. He decides that he will continue his career as the Batman to fight crime in secret.

Retrieved from "https://heykidscomics.fandom.com/wiki/Secret_Origins_Vol_2_6?oldid=1456957"
Community content is available under CC-BY-SA unless otherwise noted.