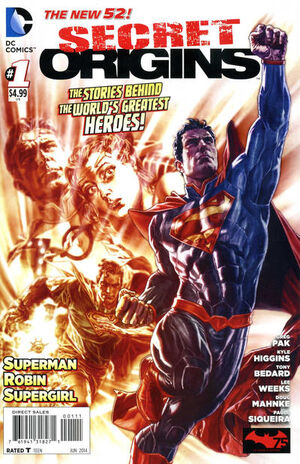 Not long after the baby Kal-El was born, his father was already trying desperately to convince the Krpytonian Hall of Science that the planet Krypton would explode in just six months' time. His wife, Lara had known that his attempts were just meant to keep their child safe, but as a warrior, she understood that safety comes from strength.

Just as Jor-El had predicted, the planet began to collapse, and because of his public disgrace, he had only the budget to create a single prototype ship - big enough only to save the life of his son Kal. As she placed him into the spacecraft, Lara promised that one day, he would save everyone. Though she wished to tell him more, she had only time to record a brief message for him, begging him to remember what it is to be loved. She offered wishes that someone would be there for him, and that one day he would meet another woman whom he could love as a mother.

That woman was Martha Kent. Though she and her husband couldn't explain where the boy the infant they'd found came from, Martha understood one thing that Jonathan could not. She had kissed his forehead and tasted the salt of another woman's tears. Someone had wept over him. Someone had loved him. On the night that she'd found him, he'd grabbed her finger, and accidentally broke it. She sensed that he was sorry for what he'd done - which was strange, because she had read numerous baby-books while trying to conceive a child, up until the miscarriage, and she knew that empathy was beyond the capability of an infant of this age. Jonathan had wanted to take the child to the police, but she insisted that the right thing to do was to keep the boy. Jonathan knew better than to argue.

Though raising the baby they named Clark was a challenge, Martha never worried about what he'd become. She knew who he was inside. She also knew, though, that someday she would be gone, and none of his powers would be able to bring her back. She guessed that he would likely mourn for some time, until he remembered the voice of the mother he'd never had, and the voice of the mother he did have. And that would remind him of what it means to be loved. That memory would drive him to become the man that both of his mothers had always dreamed he could be: a Superman.

Appearing in "The Long Year"Edit

Synopsis for "The Long Year"Edit

The day before his mother's birthday, Dick Grayson attended Amusement Mile with his parents, but soon wanted to ditch them and hang out with his friend Raymond. Before he'd let Dick go, John Grayson took his son aside to remind him that it was Mary's birthday. Grinning, Dick responded that he'd taken care of getting her a present weeks ago, promising that it would be a doozie.

The next day, Mary was more than happy with the bracelet he'd given her - one emblazoned with Robins. His initiative and care led both parents to believe that they had succeeded in raising a good boy - even if he needed to do a bit more growing up. While eavesdropping, Dick's attention was caught by a different conversation between C.C. Haly and Tony Zucco. Zucco was trying to shake the circus down for money, and Haly had assured him that there wasn't any money left in the circus. That night, Zucco proved he was serious by ensuring that the Flying Graysons wouldn't live through their act. Dick had watched both of his parents die, and was comforted by Jim Gordon and Bruce Wayne.

Sometime later, after Dick had been housed in a Wayne Foundation facility, he received a visit from Bruce, asking if there was anything he could do. All Dick wanted was revenge. For weeks, he would sneak out at night and make violent attacks on Zucco's last known associates. On one such occasion, he made a slip-up, and wound up with a gun to his head. Fortunately, the Batman appeared, and saved his life. He brought Dick back to the Batcave, where Dick warned that he knew he'd been followed, even though Batman had been acting as though it was him looking for Zucco. Batman explained that he was looking for Zucco, but that he was part of a much larger web of crime, tracing back to Sal Maroni and Carmine Falcone. In theory, catching Zucco would have provided leverage in turning him against the Gotham crime bosses - but that's not what Batman's main interest was. He removed his cowl, revealing his identity, explaining that he wanted to help Dick catch Tony Zucco - if he'd let him.

For a long time, Bruce trained Dick to become something more, and to start over with his life. Eventually, they reached a point at which it was time for Dick to design his own uniform - but he had trouble finding the inspiration for it. While attempting to do so on a spring day, his attention was caught by two flitting robins. Seeing Dick's attention shift, Bruce explained that in some cultures, the robin is seen as a sign of hope and rebirth. Dick knew then what he would become.

On the one year anniversary of his parents' death, Dick struggled to think of a way to show his remembrance for them, like Bruce did for his parents every year. Alfred Pennyworth had responded that there was no need to mourn them, when it might be better to celebrate the lives they lived. After all, that's what robins are all about. Liking the idea, Dick took the train to Amusement Mile, and rode the roller-coaster in memory of his parents.

Appearing in "Daughter of the House of El"Edit

Synopsis for "Daughter of the House of El"Edit

When she was preparing for The Trials - the tests that would decide the course of their the children of Krypton - Kara Zor-El had followed two girls who'd snuck away from camp after curfew. They'd been trying to prove just how close they could get to a creature called a Fireclaw, but in the process, they enraged it, and were forced to run for their lives. Kara had brought a zap-staff with her, and leapt up to defend them. This wasn't enough, of course, and soon her life was flashing before her eyes - with disappointing results. Fortunately, some bots arrived, sedating the creature, and collecting the truant girls. Furthermore, they deducted points from each girl's aggregate score in the Trials - with Kara taking the greatest hit.

Later, her mother Alura explained that no good deed goes unpunished, reminding that the point of the trials is for young people to earn their roles in society, and the right to wear their family crests. Interfering with another person's score is the worst thing one can do. The fact that Kara had lied to excuse the other girls' decision to sneak off as an accident meant that she was interfering, and would therefore take a penalty. Sometimes, Alura had said, doing the right thing meant living with the consequences - but the important thing is to do the right thing regardless. That is how she would uphold the honor of the House of El.

The House of El was one of the few long-standing and prestigious families on Krypton - and Kara's parents rarely let her forget the legacy she was meant ot live up to. Zor-El and Jor-El were both renowned scientists, like their father and grandfather before them. Both of their wives had been warriors, with Lara Lor-Van - Jor-El's wife - a soldier, and Kara's own mother one of the Peace Praetors of Argo City. Kara had wanted to take after them both.

She had not known, however, the secret that her uncle would discover. Both he and her father had taken care to ensure that their legacies would live on. Kara's young cousin Kal would be sent to a primitive planet called Earth, where his Kryptonian physiology would absorb the energy of the yellow sun, imbuing him with godlike powers. Zor-El, though, tried to find that power closer to home. He too had planned to send his progeny to Earth, but he had begun genetic experiments on test subjects in the hopes that he could give all of Krypton's people the strength to outlive their own planet. He never did find a way to apply the power he did to aliens to the Kryptonian genome. The Worldkiller Defense program had failed - as had his plan to augment the traditional Kryptonian battle armor that many wore to public functions. Instead, he left Kara with the gift of his prototype; emblazoned with the family crest she craved. He would, unfortunately, also have to betray her trust.

Zor-El later moved his lab underground and built the Brainiac technology to shield the city of Argo from destruction. He was unsure of the system's likely success, so he'd planned to send Kara to Earth without her consent - or her mother's. When Alura found out, she shot her husband, but she was too late to prevent the escape bod from launching, and eventually Kara landed on Earth - albeit several years later than expected. She had spent a long time orbiting the yellow sun, soaking up its radiation to the point that her power would rival and exceed her cousin's.

While her power on Earth made her able to do nearly anything, the one thing it could not do was help her fit in. While rescuing a space-shuttle from certain doom, she drew the ire of the North Korean government it belonged to - and the attention of her cousin. He reminded that there were certain rules that she needed to abide by, despite the good she'd done. Kara responded that she had once been told by a great Kryptonian that sometimes, doing the right thing means living with the consequences. Though she knew Kal-El worried about her, she would act on her own terms - as difficult as getting used to an entirely different world might be.