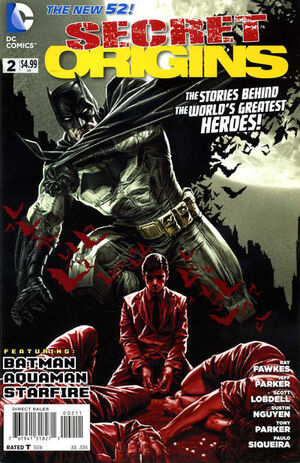 Appearing in "The Man in Shadow"Edit

Synopsis for "The Man in Shadow"Edit

Seventeen years ago, Bruce Wayne had gone to see The Mark of Zorro (1920 film) with his parents. His father Thomas was a famed doctor and heir to a dynasty, and gave his son integrity. His mother Martha was the spokeswoman for a host of charities, and she gave her son compassion. The man who shot them, though - he gave Bruce Wayne his darkness.

Bruce obsessed over the details of his parents' murder for years - the sounds and sights that occurred during the two breaths between the two shots. And he particularly obsessed about his father's last words. He had attempted to find a reason for the mugging and address it - but Bruce had decided that there was no reason. Gotham agreed.

When the city saw two of its pillars fall, everything turned. The people saw how the many things the Waynes had earned themselves got them nothing. If the people who had everything could die like that, there could be nothing that might be able to ward off any misfortune.

After they died, Alfred had told Bruce that he would certainly wish for the Waynes back if he could. Bruce responded by telling a story of how when he'd feared the bats on the grounds of the Manor, his mother had told him that his father had cut a deal with the bats so that they'd only attack wicked people who didn't eat their vegetables. By the time they died, he knew that wasn't true, and that his parents were really gone. What he would have wished for, then - instead of his parents back - would be a world in which nobody died as they did.

Within four years, Bruce Wayne disappeared from Gotham. While he learned, trained, and surpassed in every field possible, the criminals of Gotham graduated from muggings to terrorism. Seven years ago, he trained in sword-fighting, and learned that the best way to best an equal is to shock the enemy; to quell his spirit.

Six years ago, he returned to Gotham with all he'd learned - but all his strength and ingenuity couldn't prepare him for what waited there. He had trained to face criminals, but what Gotham had developed in his absence was monsters. So, he became a bat so that he could once again shock his enemies.

The people of Gotham began to look up and see that one man could make a difference. The Red Hood Gang collapsed. The Falcone Crime Family was destroyed. Corrupt officials were exposed. The monsters the city had created began to hide in the darker corners because they had learned to fear the Batman. While they would call him a maniac and a demon, others would call him hero.

Years ago, Atlanna had seen the man Tom Curry helping many sailors and ships from his Lighthouse. One night, as he'd tried to rescue a man who fell overboard, he was caught in a violent wave and carried off. It was Atlanna who rescued him then. He had not expected to be saved - or to fall in love with his saviour. They had a son, eventually - Arthur - and he'd been a happy child for a time. That was until Atlanna left.

Though Tom was always there for Arthur, he failed to realize that his son might inherit some of his mother's gifts - and learning of that was not a welcome revelation. He turned to doctor Stephen Shin for help, whom he knew would keep their secrets. Tom made sure that Arthur's life would stay relatively normal, despite his gifts.

His father had been sick on the day of Arthur's graduation from high school, but he came anyway. As he congratulated his son, Doctor Shin interrupted, bringing a guest with him - a reporter. Doctor Shin had decided the time had come to make his research public. But Tom had promised Arthur's mother that he wouldn't tell anyone about Atlantis. He had Arthur leave Amnesty Bay for a few days while he emptied the lab that he and Doctor Shin had set up in the Lighthouse, and destroyed the research. Arthur, though, made the mistake of being too open with his abilities in front of his friend Danny. Fortunately, Danny understood, and when a downed plane needed help nearby, he encouraged his friend to go and help however he could. He had tried to be secretive about the rescue, but when lives were at stake, he had to make a difficult choice, and carried the entire plane up out of the sea on his back. Witnesses soon recognized him as the lighthouse keeper's son.

When he arrived home, he found his father being attacked by a thief, and though he helped, he wasn't able to prevent his father from becoming even more ill. On his deathbed, Tom begged his son to find his mother and give her a message. Instead of leaving then and there, Arthur sought revenge on Doctor Shin, who had hired the thief. When Arthur found the man he thought was the thief, he killed him - only to realize that the man he'd killed was actually the real thief's father.

Arthur's father's pneumonia had only been aggravated by the excitement of the thief's actions - not any violence on his part. The thief had been a career criminal and he wanted revenge for himself - as the Black Manta.

In the meantime, the world had already learned what Arthur was, and he needed to escape that. While his friends went to college, he swam the world, and eventually found others like him, who led him to Atlantis, where he was hailed as the the first son of their Queen Atlanna.

Unwilling to immediately inherit that role, he left to found The Others, and later joined the Justice League in their fight against Darkseid.

Now, standing at his mother's grave, Arthur explains that he has met someone important to him - someone who makes him feel the way he believes his father felt about her. In all the time since his father died, Arthur had never delivered the message. He had come so far in the search for his mother, and never reached the end of that search until this time. At last, he can deliver the message: Tom Curry had never stopped waiting for her. He had never stopped loving her.

Koriand'r was the youngest daughter of the first house of Tamaran, and her older sister Kommand'r had loved her, knowing that one day she would pass on the rule of the kingdom to her. Kori had never believed that would come to pass, but the reality that came to be proved otherwise.

Tamaran fell under attack by the Citadel. Kori had refused to bow to the invaders, but her sister insisted that she should stand down so that she might live to fight another day. As it turned out, the Citadel had only been in service to the Dominators and the Psions, and together they had conspired to manipulate the planet Tamaran by killing the king and queen and putting their inexperienced daughter Kommand'r in charge.

Koriand'r, though, was experimented on at the command of the mysterious Helspont. Within months, Kommand'r was placed as a figurehead upon the throne, but as compromise, she was forced to banish her own sister from her home world, simultaneously eliminating one of the greatest threats to the Citadel's rule and breaking the queen's spirit.

Koriand'r was taken to the planet Takron and imprisoned, surviving on the strength of her hatred alone. The other prisoners avoided her, and her rage grew and festered. One day, when a sympathetic Citadel guard offered a favour, she took his vulnerable moment to kill him using all the power that had built up inside of her. She was overwhelmed and beaten soon after.

As she underwent further experiments, she could feel the change within her - one that would persist long after she achieved freedom. But it would be years before that happened. Her captors addicted her to drugs, making her feel numb.

At last, she was transferred as a slave to the S.S. Starfire, where she met Orn, an albino Citadel who had betrayed his masters. She spotted him carrying contraband food, and followed him, watching as he delivered food to a dying friend. The sight of another acting with kindness, loyalty, and love brought a tear to her eye. She decided to join them, and befriended them quickly. As the power within her grew, she decided to embrace it, freeing herself from her slavery at last. Soon, she led a rebellion and became captain of the Starfire, taking the ship's name as her own.