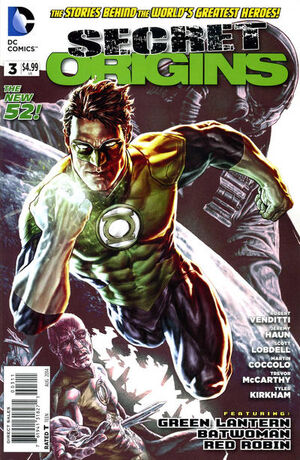 Standing over his grave, I had a choice: spend my life running away from fear, or charge toward it. Face it. Beat it. You know, living.

Appearing in "Freedom from Fear"Edit

Synopsis for "Freedom from Fear"Edit

When he was a boy, Hal Jordan watched his father - a pilot - die in a crash. He had wanted to be like his father, but that dream died with him. Hal's elder brother Jack responded with anger, having to become more responsible overnight. His little brother Jim remained young, perhaps forgetting his father entirely. His mother, Jessica prayed, hoping to keep the tragedy she was always prepared for from happening to her children as well as her husband. Hal, though, faced his fear, and became a pilot too.

Reckless as Hal seemed in flight, it was not fearlessness that made him so. It was his terror. He had watched his father die in a plane, and he had made a choice over his grave to face that terror and defeat it, rather than run from it. However, this method had the unfortunate side-effect of making him hard to control, and Hal's recklessness got him demoted from pilot to mechanic. It was then, while he was tuning up a plane, that Hal was chosen by the Green Lantern Ring. It showed him to the crash-site of Abin Sur's craft - he would make the first known instance of contact with alien life, and all he could think was whose father this dying pilot might have been.

The alien explained the nature of the ring, and the Green Lantern Corps, offering Hal the chance to accept his role as the Green Lantern of Sector 2814 in his stead. Choosing to face his anxiety and fear about what he'd seen and heard, Hal agreed, and the ring recognized his ability to overcome fear.

But with that role came a command structure and orders. Stuck in boot camp again, he learned the nature of the Corps and how to wield the ring by force of will, and by overcoming fear. But he made the mistake of facing fear from without the Corps. When Sinestro took fear and weaponized it, he assembled a Corps of his own to spark the first War of Light.

When not needed by the Corps, Hal still sneaks flights in real planes, wondering at hose his life was defined by two crashes. The first one took everything from him, while the second gifted him with more than he could imagine.

On Kate Kane's twelfth birthday, her twin sister Beth and her mother Gabi were kidnapped thought to be murdered by terrorists. It was her own father, Jacob who found her and rescued her from that place, warning her not to look back at the carnage that he carried her from.

Later that day, she had not yet fully accepted what happened when she walked down the stairs from her room to find her father weeping next to the unused party decorations. Hugging her to him, he promised that they would soldier on. They would be okay.

Years later, Kate would give up her place at West Point by admitting to her superior officer that she was gay. She had already been under investigation for her homosexual conduct, and rather than lie, she told the truth. When she told her father what had happened, he was proud of her integrity.

After entering a bar-hopping rebellious phase, Kate was attacked in an alley by a mugger, and fought back using her military training. Though she fought off her attacker, she was seen by the Batman, who - though impressed - warned her not to make a habit of it. Inspired by his example, she took up vigilantism using stolen ordnance, drawing her father's attention. Though he disapproved, when he realized her conviction, Jake agreed to train her and help her to become the Batwoman.

Sometime later, she met Maggie Sawyer at a ball and began a romantic relationship, resulting in their engagement. After all that had happened to her, though, Kate never forgot her mother or sister - or the positive influence of her father.

Against the odds, Tim Drake discovered the Batman's identity. It had taken him ages to narrow it down to two candidates in Bruce Wayne and Enrique Fluente - a dead arms dealer. One night, his mother called him away from his search to participate in his gymnastics event. While the games were muscle memory for him, his mind was focused on his search. During his routine, he spotted two elderly men watching, and found their presence suspicious.

Assuming that it must have been Bruce Wayne scouting him, he followed the clues to the Gotham Aviary, and found Batman waiting for him. Unable to bring himself to out his idol, Tim simply stated that he wanted to apply for the role of the new Robin. He already knew that two had come before - and he suspected something bad had happened to the most recent one. Batman refused him, and left, but this only drove Tim to work harder.

He spent weeks trying harder, and digging deeper, forgetting to eat and giving up on school work. Learning that he could not get to Bruce directly, he decided instead to target one of Batman's enemies; the Penguin. His hacked bank account led Cobblepot to send assassins to Tim's house, and Batman did come, to protect Tim and his family. Unfortunately, the end result was that Tim had to give up his parents to a witness protection program and give up his real name for his own safety.

However, he was welcomed into Wayne Manor, and he pretended to act surprised when he "discovered" the Batcave - though its contents and scope were quite surprising indeed. Before long, Batman offered him the role of Robin. Not wanting to replace Jason Todd, but rather honour him, Tim chose a different name for himself: Red Robin.

It came as no surprise to Batman when Tim eventually decided to move on, and do other things, like leading the Teen Titans.

Retrieved from "https://heykidscomics.fandom.com/wiki/Secret_Origins_Vol_3_3?oldid=1457004"
Community content is available under CC-BY-SA unless otherwise noted.