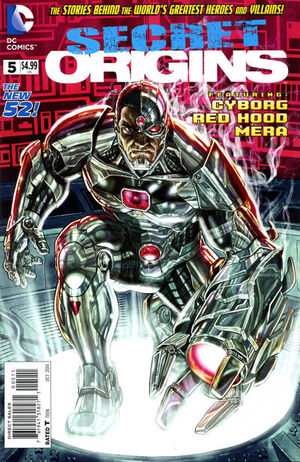 At S.T.A.R. Labs in Detroit, Victor Stone argues with his father about the viability of an experiment, prompting a new lab technician to wonder aloud if they always bicker like this. Vic overhears the comment, and thinks back to his past as a star football player.

His relationship with his father at that time had been strained too. His father had hoped he'd do something more important with his life than games when he was bright enough to do otherwise, but those games won Vic friends and more. His talent had even won him five full scholarships, but because he wasn't yet eighteen, he would need his father's permission before any contracts were signed. Naturally, Silas refused, claiming to know what's best for his son. Victor complained that he had worked to get this far in his life without any of his father's help, and while he'll always love his dad, he can't live fighting for what he wants with a man who struggled to get what he wanted for so long.

Soon after Vic turned eighteen, he moved out and then in with some friends. He began at MSU in the fall, and all summer, his father called him, begging to talk. When he ran out of excuses, Vic met his father at S.T.A.R. Labs. He and his father didn't even have time to speak a word between them when an accident in the lab saw a portal open to Apokolips, unleashing Parademons from a Boom Tube. Victor was caught in the Boom Tube's energies, and his body began to burn away. Desperately, Silas had his son taken to the Red Room, where the alien technology there was used to build him a new cyborg body. As strained as their relationship was, he never left Victor's side, helping him in his rehabilitation throughout.

Eventually, Victor found his purpose and motivation to keep living in the Justice League, and while he used to see a monster when he looked in the mirror, his father only saw his son.

Despite losing both of his parents, Jason Todd found joy in living on the streets of Gotham City. He had been taken in by Dr. Leslie Thompkins, but within a month, he decided to rob her clinic of drugs to make some quick money. He was stopped in the act by the Batman. When Batman learned Jason was homeless, he had the boy delivered at Wayne Manor, home of the city's wealthiest business man, Bruce Wayne. Thinking he'd get out before he overstayed his welcome, Jason planned to leave soon after, but Bruce took him aside and showed him the Batcave. When he offered Jason the job of Robin, he gladly accepted.

They trained for some time, in both combat and matters scientific, until Jason was ready to put on the costume and go on patrol. Bruce's faith in him through all this made Jason want to impress him - to prove he could do it. Despite his successes, both he and Bruce were aware that he had trouble controlling his rage. When Jason realized, though, that their motivations were different - that Bruce just wanted him to fill a hole in his life left by the previous Robin, he became disillusioned. Within two weeks, he learned that his mother was alive and sought her out, only to discover that it had been a set up by the Joker, who brutally beat him and left him to die in an explosion.

Jason woke suddenly, buried alive in his coffin, and clawed his way out, to find Talia al Ghul standing over him. She submerged him in the Lazarus Pit, and took him to the Acres of All, where he was trained further by Ducra and the All-Caste to become an assassin.

Eventually, he decided that they couldn't change him into what Talia expected of him, and he returned to Gotham, unsure of what to do with himself other than to make a statement. At an museum exhibit featuring the super-villains of Gotham, he saw Red Hood One's costume enshrined, and decided that if the Joker had taken his life, he would take the Joker's - and the Batman's for letting it happen.

As the Red Hood, he channelled his pent up anger into violent and deadly vigilantism, and was thwarted by Batman in both of his planned assassinations. They made up, eventually, but Jason would never be Robin again. He would forever be an outlaw called the Red Hood.

Appearing in "Mera: The Mission"Edit

Synopsis for "Mera: The Mission"Edit

Princess Mera of Xebel showed great talent in the art of water-shaping, making her father, King Ryus very proud. Her betrothed, Nereus the Military Chief, was jealous, though. She was intended to him, and once he joined into their family, he would gain the water-shaping ability as well. He had hoped that it would be he who passed through the barrier between Xebel and Atlantis to murder the king of that place, and take revenge. Mera, had been chosen instead.

When news of a sinking sea-vessel reached Xebel, Mera was sent to rescue it, knowing that only shipwrecked vessels could penetrate the barrier separating Xebel from the world. The next day, she was to pass through the barrier, and her father took her aside, gifting her with a pendant meant to deliver a message from her lost mother, which she was to listen to only after getting through the barrier. As Mera left, her father stumbled, though he regained composure. His weakness did not go unnoticed by Nereus, though.

Upon reaching the surface, Mera accosted a small fishing vessel and demanded to know where Atlantis was located. Bewildered, they thought that would be the only place she could have come from, and she scoffed, having learned only that the Atlanteans were evil betrayers. The fishermen told her of Aquaman, who had saved a great many seafarers.

When she finally met him, he was guiding a pod of whales through a rocky reef, hoping to get them to a place where a fungal infection impairing their navigation can be treated in safety. He was surprised by her ability to shape water, and wondered where she came from. She realized soon that this man was not as bad as her father had told her. When he asked her to have dinner with him and tell him all about where she came from, she decided she would assassinate him after that.

Over dinner, he asked her about her pendant, and she realized suddenly that she hadn't listened to her mother's message yet. Worriedly, she rushed off to hear it in private. Her mother's message told her that she should complete her mission, and once done, she would be free. Free to marry whomever she chose and to be whomever she wanted to be. Aquaman caught up with her, and found her in tears. He admitted he had eavesdropped, and heard tell of a mission she had to complete. Coyly, she responded that she did - but it might take a long time to complete it.

Retrieved from "https://heykidscomics.fandom.com/wiki/Secret_Origins_Vol_3_5?oldid=1457006"
Community content is available under CC-BY-SA unless otherwise noted.