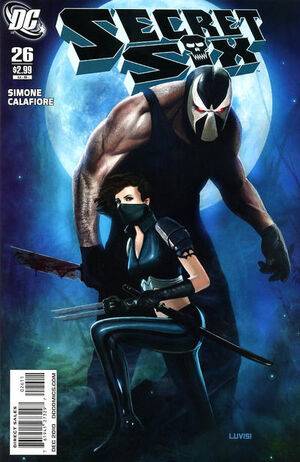 Bane and Jeannette arrive on Skartaris with their own Secret Six team consisting of Giganta, Lady Vic, Dwarfstar, and King Shark, and start a blood bath. In Washington, D.C., Amanda Waller asks Spy Smasher to pull her team out of Skartaris. Spy Smasher refuses and tells Amanda that she's "not in the loop on this". Further, she tells Amanda that there will be a nuclear strike on U.S. soil in two weeks, and that they are allowing it. Meanwhile, Deadshot and his Secret Six (Catman, Scandal, Ragdoll, Black Alice) try to find out from Tremor who Mockingbird is. Tremor refuses to tell them, but the offer of their records being expunged is good enough that the team travels through a portal to Skartaris anyways. They meet up with some of the local fauna, and Black Alice finds that her powers do not work - she can't find anyone to mimic. Finally, it seems that Bane's team has managed to come to an agreement with Lorina and her people when they are attacked by - the Secret Six!

Retrieved from "https://heykidscomics.fandom.com/wiki/Secret_Six_Vol_3_26?oldid=1457045"
Community content is available under CC-BY-SA unless otherwise noted.