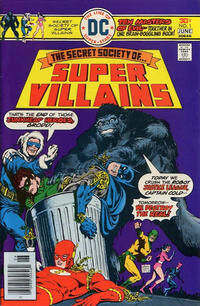 The day I can't handle myself is the day I surrender to King Solivar. No one uses Gorilla Grodd for a punching bag!

Appearing in "Attend -- Or Die!"Edit

Synopsis for "Attend -- Or Die!"Edit

A grouping of supervillains are called together by invitation to the mysterious Sinister Citadel in San Francisco, to become members of a new Secret Society. After meeting each other (many for the first time) and wondering the nature of their mutual calling, they are seemingly set upon by the Justice League of America. After they defeat the heroes, they discover that they were in reality robots. A host steps out and reveals himself, Manhunter, an evil clone of the original Manhunter. He lectures the villains on the benefits of joining together as a form of "enlightened self-interest", and then tells them that a mysterious benefactor he is working as an agent of requests that they prove themselves. Grodd and Copperhead are sent on a mission together to steal plutonium from a containment center in San Francisco Bay. Although they are successful in stealing it, Copperhead drops it into the water when he is shot. Grodd leaves him behind to be caught by the police, and reports failure back to Manhunter.

Retrieved from "https://heykidscomics.fandom.com/wiki/Secret_Society_of_Super-Villains_Vol_1_1?oldid=1515730"
Community content is available under CC-BY-SA unless otherwise noted.