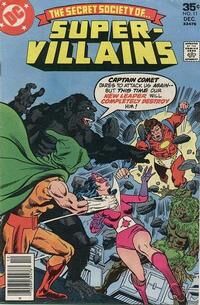 Appearing in "A Changing of the Guard"Edit

Synopsis for "A Changing of the Guard"Edit

Gorilla Grodd is imprisoned in Gorilla City following his battle against Wonder Woman and the Atom. Captain Comet thinks that the Society has been destroyed, and resumes his romance with "Debbie", the girl who is secretly the Star Sapphire. The Wizard tricks the authorities into bringing him the cloak, glove, and magic prism of the Sorcerer's Treasures, which he uses to reenergize himself, break prison, and give himself a new uniform. Once freed, he joins with Star Sapphire and the Floronic Man, reveals that he has been the secret backer of the Secret Society since Darkseid's exodus, and gives Funky Flashman the magical bum's rush.