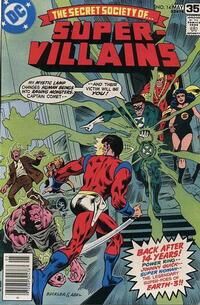 Appearing in "Crisis on Earth-Three"Edit

Synopsis for "Crisis on Earth-Three"Edit

Freed from their interdimensional prison, the three members of the Crime Syndicate of America decide to restart their conquerance of Earth-Three. Due to years of non-use Power Ring's mystic lamp is leaking energy that is changing the human populace into monsters. Comet stops Power Ring's attack by seemingly destroying the lamp and recaptures Super-Woman and Johnny Quick before heading off to Earth-Two after the Wizard and the other Super-Villians.