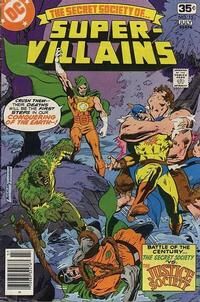 Appearing in "The Wizard's War of the Worlds"Edit

Synopsis for "The Wizard's War of the Worlds"Edit

The SSoSV attempts to destroy the JSA on Earth-Two, beginning with Doctor Mid-Nite and the Atom. Meanwhile, back on Earth-One, Mirror Master and Copperhead are hired by the Silver Ghost to assemble a squad to destroy the Freedom Fighters.

Conclusion of the story in Justice League of America #166-168, the Secret Society of Super-Villains, including The Wizard, The Floronic Man, Star Sapphire, Professor Zoom, and Blockbuster, captures JLA members Superman, Batman, Green Lantern Hal Jordan, Zatanna and Wonder Woman and switches bodies with the heroes. In the original comics, the villains did not learn the heroes' identities. However, in Identity Crisis, a flashback to the event indicates they did learn the JLA members' secret identities. At the conclusion of the flashback, Zatanna erases the villains' memories of the incident and the secret identities.

Black Canary's appearance in the photo of the JSA members is almost certainly a continuity error. Dinah Drake Lance was long dead before Power Girl and the Star Spangled Kid joined the JSA (though this was not known at that time) and her daughter, Dinah Laurel Lance, on Earth-One. Dinah Laurel Lance is listed here since she is the only Black Canary who could logically have been in thephoto: possibly, she was visiting Earth-Two at the time.