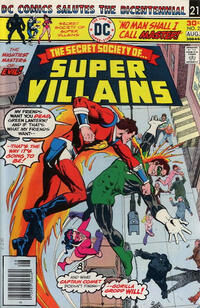 That was a blast of charged atoms, mutant -- courtesy of Mantis -- whom men call the energy vampire!

Appearing in "No Man Shall I Call Master!"Edit

Synopsis for "No Man Shall I Call Master!"Edit

Captain Comet, a hero from the 1950's, returns to Earth after a long absence and stumbles onto a battle between Green Lantern and Grodd and Hi-Jack. Comet mistakes Green Lantern for the aggressor and helps the villains defeat him. They take him to the Sinister Citadel, where the duped hero is voted into the Secret Society. However, Manhunter reveals the group's true nature to Comet in secret, and tells him of his own misgivings about the Society. Soon afterward, Manhunter shows the Society members an installation of Darkseid, their secret benefactor. They are confronted by Darkseid's minion Mantis and his slaves, who offer them the choice to surrender willingly to the domination of the Lord of Apokolips, or die.

Retrieved from "https://heykidscomics.fandom.com/wiki/Secret_Society_of_Super-Villains_Vol_1_2?oldid=1457057"
Community content is available under CC-BY-SA unless otherwise noted.