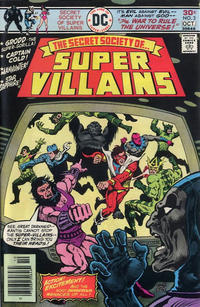 Appearing in "War for Earthdeath!"Edit

Synopsis for "War for Earthdeath!"Edit

On Apokolips, Darkseid reveals that he formed the Secret Society of Super-Villains to be a more efficient replacement for Inter-Gang. Mantis defeats the Society members, but Star Sapphire and Manhunter escape. Manhunter rallies the free members of the Society to come to the captives' rescue, and Star Sapphire contacts Green Lantern to come to their aid. The Society frees its captured members and defeats Mantis in battle. Darkseid, observing the conflict, declares that he and his son Kalibak will go to Earth to discipline them.

Retrieved from "https://heykidscomics.fandom.com/wiki/Secret_Society_of_Super-Villains_Vol_1_3?oldid=1457058"
Community content is available under CC-BY-SA unless otherwise noted.