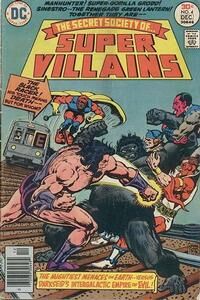 Appearing in "When Thieves Fall Out..."Edit

Synopsis for "When Thieves Fall Out..."Edit

The Wizard and Sinestro leave the team after the former banishes Hi-Jack to limbo. Green Lantern battles Mantis, but ends up unwittingly recharging the power-sapping villain. Mantis boasts that he will soon have more power than Darkseid, at which point Darkseid arrives. Funky Flashman, a promoter, contacts several Society members with a proposal to become their publicity agent. Finally, Kalibak battles Grodd and the Society, and as Mantis cowers before Darkseid, the Apokolips Lord points out the presence of the Black Racer, harbinger of death.

Hi-Jack is banished to limbo by the Wizard in this issue. His next appearance is in Justice League of America #167, in which he is inexplicably back on Earth and praises the Wizard as being a better leader for the Society than Funky Flashman (whom he never meets in this series).

Retrieved from "https://heykidscomics.fandom.com/wiki/Secret_Society_of_Super-Villains_Vol_1_4?oldid=1691503"
Community content is available under CC-BY-SA unless otherwise noted.