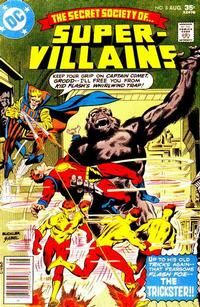 Appearing in "Let the Villain Fit the Crime"Edit

Synopsis for "Let the Villain Fit the Crime"Edit

Kid Flash goes after Andrew Mell, a criminal who has recovered the Energy Prism, one of three Sorcerer's Treasures formerly disposed of by Superman and Batman. Mell uses the prism to defeat Kid Flash, but the Secret Society appears and steals the prism from him. The young speedster manages to get to the JLA satellite, where he meets Captain Comet. Comet joins him in a search for the Society.