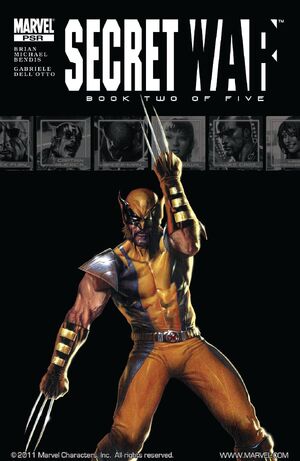 "One year ago," Captain America stopped a group of terrorists from kidnapping their nation's ambassador in front of the United Nations Headquarters. Later, he was approached by Nick Fury, who needs a team to carry out "something secret."

In Hell's Kitchen, Daredevil stopped a group of "drug-addled teenagers" from stealing a woman's purse, then left the scene when the police arrived before heading to his law office where he found Nick Fury waiting to meet with him.

In Harlem, Luke Cage intimidated a drug dealer and ordered him never to sell in Harlem again before releasing the kid, after which Cage was approached by Nick Fury.

Elsewhere in New York City, Spider-Man headed home for "a night to remember" with his wife, but arrived to find Nick Fury in his apartment. Fury requested that Parker accompany him on a trip the following week with "no costume, no webs."

The following week, Parker rushed to board "Flight 456 to Latveria," and discovers Matt Murdock, Luke Cage, and Steve Rogers already on the plane. Murdock admitted to him that he also knew nothing of their mission, and Parker saw Wolverine stumble drunkenly out of the bathroom and recognized Parker's scent. Wolverine made lewd comments to the flight attendant until Rogers threatened to remove Howlett from the plane unless he did "what the lady says." None of them seemed to notice the dark-haired girl among them.

In Latveria, Rogers is greeted at the airport by the Latverian attaché of domestic affairs, and Murdock is approached by Natasha Romanov, who escorts the team out of the airport along with the dark-haired girl, who claims to be "with the group."

At a safehouse, Natasha confirmed that the building is clean of listening devices and opened the door for a large woman who is revealed to be Nick Fury in disguise. Fury explained that S.H.I.E.L.D. had built a case proving that the Latverian government was funding tech-themed criminals in the United States, and briefed the team on its mission: to overthrow the Latverian government.

"Today," Fury visits Metro Hospital where he finds Jessica Jones and Danny Rand sitting with a comatose Luke Cage. Moments later, Steve Rogers arrives, attacking Fury as he insists that he warned Fury that something like this would happen.

Retrieved from "https://heykidscomics.fandom.com/wiki/Secret_War_Vol_1_2?oldid=1651614"
Community content is available under CC-BY-SA unless otherwise noted.