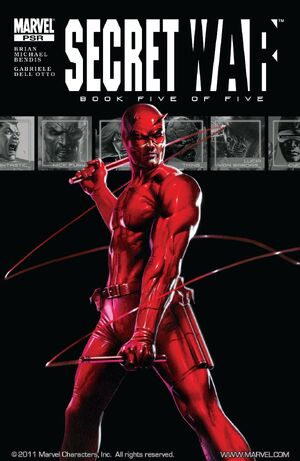 You are herrrrroes. More than me. Maybe one day you'll llllook around and you'll see the world like I have to, and you'll knowwww I did the right thing. Or at least you'll undersssstand why I did it. Signin' offfffffffff.

In the S.H.I.E.L.D. Helicarrier's Interrogation Room C, Commander Marie Hill questions 18-year-old Agent Daisy Johnson regarding the incident in New York City, but Johnson suggests that Hill watch the satellite recording of the event for herself.

"Six hours earlier," Lucia von Bardas battled against Nick Fury, Captain America, Daredevil, Spider-Man, and the Fantastic Four as she created a massive antimatter bomb by networking the armor of a battalion of technology-themed supervillains. The Thing destroyed the pier in an attempt to diffuse the building energy, and von Bardos was incapacitated by the timely arrival of Daisy Johnson.

Aboard the Helicarrier, Johnson explains to Hill that she is not a mutant, but does possess powers from "genetic damage, handed down from [her] jerk of a father," and that she used her "ability to generate seismic waves" to pinpoint von Bardas's power source and short-circuit it.

Following the battle in New York City, Rogers threatens to explain what has happened if Fury refuses, but the conversation is interrupted by the arrival of Wolverine, Emma Frost, Cyclops, and Shadowcat, who demand to know why Wolverine was attacked on the grounds of Xavier's School for Gifted Youngsters. Fury explains that Wolverine, like Rogers, Murdock, Parker, and Luke Cage, was targeted for his part in helping to overthrow the Latverian government "a year ago today," though none of them remember taking part in such an insurrection. Rogers claims that there is a reason, and Fury explains.

A year prior, Fury briefed the President on his evidence that tech-themed supervillains in the United States were being financed through the Tinkerer by Lucia von Bardas. The President decided to handle the situation diplomatically, and Fury decided to ignore the President's orders in order to deal with the threat directly. He recruited Steve Rogers, Matt Murdock, Luke Cage, Peter Parker, and Wolverine, and flew the team to Latveria where they launched an attack on Castle Doom, where they cornered von Bardas before Agent Johnson used her seismic powers to collapse the entire Castle.

In the aftermath of the battle in New York City, Fury told the assembled heroes that his actions were "the language they understand," and explained that after the attack on Castle Doom, S.H.I.E.L.D. erased the memories of everyone involved. He defended his decision, claiming that "this fight was absolutely worth dying for, and it was worth sacrificing you for. It was worth losing my job for. And it was worth killing for." Wolverine insisted that he would have completed the mission "without the head games," then drove his claws through Fury's chest before Agent Johnson used her seismic powers to explode Wolverine's heart inside his chest. Before dying, Fury revealed that he was a life model decoy and claimed that no one would ever see or hear from him again, and Johnson explained that the real Nick Fury had left the scene shortly after the battle ended.

Aboard the Helicarrier, Agent Hill demands to know where Fury is, but Agent Johnson insists that she doesn't know. Hill calls Fury a war criminal and, having become the new director of S.H.I.E.L.D., takes Johnson off assignment before demanding that Natasha Romanov be found.

Later, on the deck of the Helicarrier, Agent Johnson receives a call, and answers simply: "Yes? Yes, sir."

Retrieved from "https://heykidscomics.fandom.com/wiki/Secret_War_Vol_1_5?oldid=1452267"
Community content is available under CC-BY-SA unless otherwise noted.