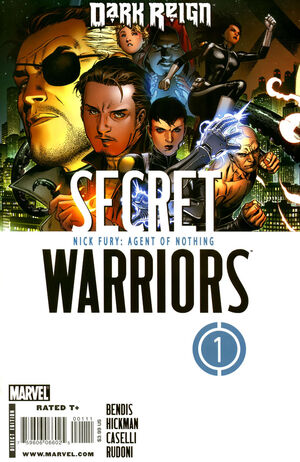 ...I've been workin' for the bad guys the whole damn time.

Appearing in "Nick Fury: Agent of Nothing, Part 1"Edit

Synopsis for "Nick Fury: Agent of Nothing, Part 1"Edit

Nick Fury's Secret Warriors are sent to an old S.H.I.E.L.D. base in Texas to observe activity there. They discover Hydra operatives there. In defiance of their orders to observe only, Slingshot, The Druid, and Stonewall engage the terrorists. In the middle of the fight, H.A.M.M.E.R. agents led by The Sentry show up to clean up the base. The Secret Warriors beat a hasty retreat back to The Cocoon. When they get back, Fury chastises them for getting seen. Hellfire expected a pat on the shoulder. Fury asks where's the lesson in that; Hellfire quotes his lesson of the difference with luck or discipline; he also points out that Fury got that quote from William Westmoreland. Fury shoots back that he might've stolen it from someone else. He tells his team that they deserve a break.

Fury and Quake walk in on Phobos, conquering Call of Duty on his Xbox. The former asks if he's been on the computer while they were gone. Phobos answers they it was too easy, so he managed to get Internet for online games. When Fury asks if there is anything else need to be "fixed", Phobos answers that they've run out of pop-tarts. As they leave the room, Fury tells Quake to keep an eye on him. The last thing he needs is Phobos having an apocalyptic meltdown because he got rejected by a girl or goes to bed without food. Daisy then switches the subject to apologize for getting her squad seen, to which Fury reacts coldly to it.

Flashing back to a month ago, Fury investigates a S.H.I.E.L.D. facility called The Carousel in Chicago. He takes out two LMDs before taking control of the third to grant him access to the base. He manages to access the bases' computers, accessing everything, from known agents, organizations and command structures. The results he finds are shocking. He copies the data and leaves before the base self-destructs. Later, he infiltrates the White House to warn The President of his findings and to ask why S.H.I.E.L.D. has been dismantled.

In the present, Fury discusses the situation with Quake. He explains that there are nine S.H.I.E.L.D. facilities that don't show up in government databases; this doesn't include the 28 bases he knows about. He knew whoever showed up would determine how extensively Hydra had infiltrated the government. What happened in Texas wasn't theft, but recovery for Hydra. He then shows on the computer that for it's entire existence, S.H.I.E.L.D. was a puppet organization of Hydra.

Nick Fury and his new band of young heroes uncover the darkest secret in the history of the Marvel Universe!! A secret that will crack the internet into tiny little pieces!! A secret that sends the Secret Warriors tumbling into an underworld of rogue S.H.I.E.L.D. agents, super-powered spies, and global criminal organizations. This is the Nick Fury book you've been waiting for! Be there for the Marvel debut of award winning Nightly News creator Jonathan Hickman as he teams up with Secret Warriors co-creator Brian Bendis to unveil a new era in Marvel mania!!

Retrieved from "https://heykidscomics.fandom.com/wiki/Secret_Warriors_Vol_1_1?oldid=1452269"
Community content is available under CC-BY-SA unless otherwise noted.