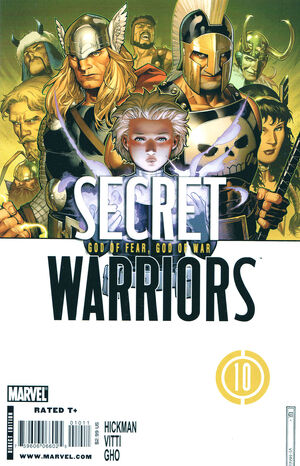 Alexander Ares-son. Child of war. God of Fear. God of Dread. Worthy successor. Honorable son. And today the first among his peers!

Appearing in "God of Fear, God of War, Part 4"Edit

Synopsis for "God of Fear, God of War, Part 4"Edit

A story is told a conflict ages ago between both Olympians and Japanese gods. Zeus and Amatsu-Mikaboshi both asked a blind blacksmith to forge weapons for them. Thus, the blacksmith forged the swords Godkiller and Grasscutter respectively for the two gods. The latter was given to Alexander, aka Phobos, which he used to kill his father Ares. He managed to get around the brainwashing Mikaboshi inflicted on him and realized what he had done.

Eleven months later in Burkina Faso, Phobos and Alex debate over the issues of war, good and evil and honor. The scenes flash through Ares' exploits with the Mighty Avengers, before Phobos saw his father with the Dark Avengers.

Nick Fury meets with Ares, asking for his help in breaking into Avengers Tower. In exchange, he promises the God of War to bring his son for judgement before the other gods. He does and Ares brings his son to another plane of existence, where he is given back his samurai armor and Grasscutter, stained with Ares' blood. Phobos is told that he will be judged before Balder the Brave, Hera and Quetzalcoatl. He is eventually found worthy of the title God of Fear because he showed none.

As the gods celebrate, Ares tells Phobos that he is not a god or demigod. To become a true god, his son must die so that he may one day be reborn.

Retrieved from "https://heykidscomics.fandom.com/wiki/Secret_Warriors_Vol_1_10?oldid=1452278"
Community content is available under CC-BY-SA unless otherwise noted.